Send me a postcard, drop me a line…

The postcard has become a lost art; a quaint relic of the past. Oh sure, you can still find quantities of them in those spinning metal racks in any airport gift shop. But who really uses them for their intended purpose anymore? Quick – how much postage does it take to send a postcard in the US? Exactly.

I came across these postcards at an antiques show a few years ago. Sure, I like to look at all the nice antique furniture and jewelry. And the old books and china are nice. But postcards are where you can really get a glimpse into the past. And since they’re not old letters, you don’t feel like you’re prying.

Of course, I like old postcards for more esoteric reasons. I love looking at the cars, the architecture, the outfits and even the old fonts and signs. So many people use the word ‘nostalgia’ in a pejorative sense, but not me. I don’t live in the past, but I sure do like to visit there. And what better way than through postcards? So let’s go! (Click on the pics for larger versions. Apologies for the sub-par scans)

(By the way, it costs 23 cents to mail a postcard as of this writing.) 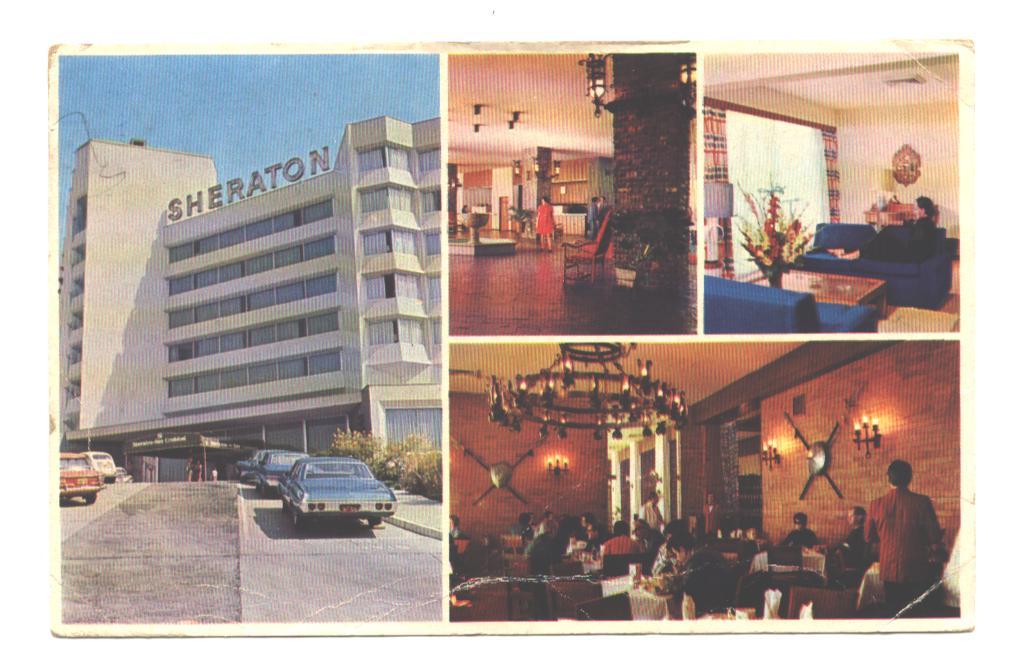 Looks like any ordinary hotel from the 1970s, no? It is, but this Sheraton is in San Cristobal, Chile. In 1976, Rina and Arthur Rolfo stayed here, and wrote home to New York.  The hotel and Chile both got rave reviews, which is nice for them. 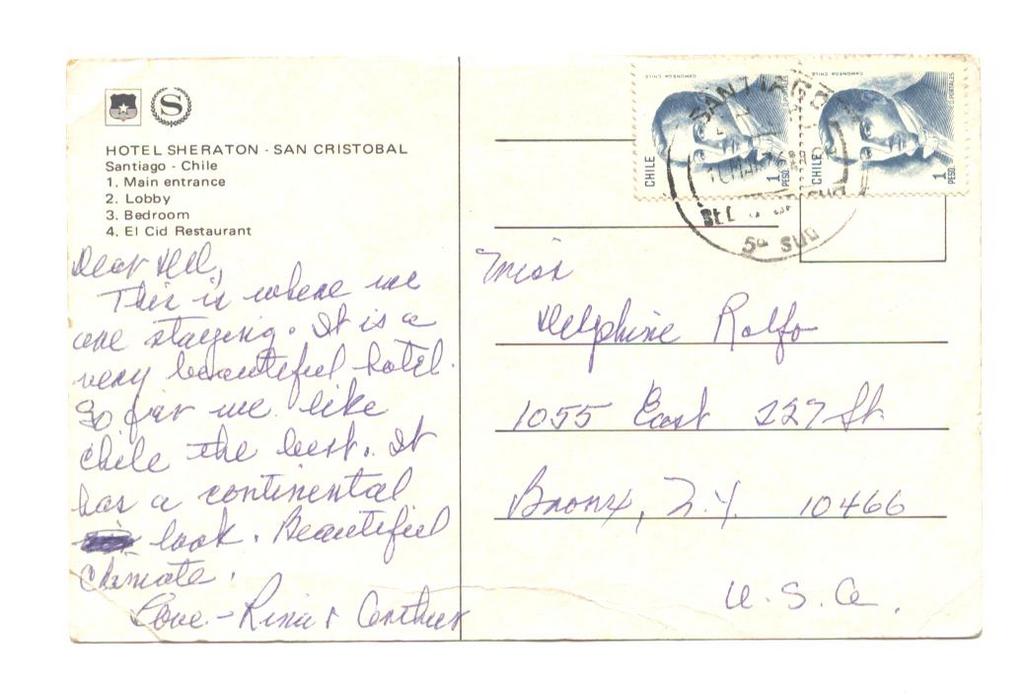 The San Cristobal Sheraton is still around. The exterior hasn’t changed too much, but just enough. Can’t say I agree with ditching the awning over the entrance.

Back in the friendly confines of the U.S. of A, our next stop is the Concord Hotel in Kiamesha Lake, NY. The postcard bills it as “The All Year – All Sports Resort.” Apparently they decided to advertise this fact with a photograph featuring the timeless sport of Small Talk. This appears to be the grand staircase for a ballroom of some sort. And man, is it ever Swanky with a capital S. 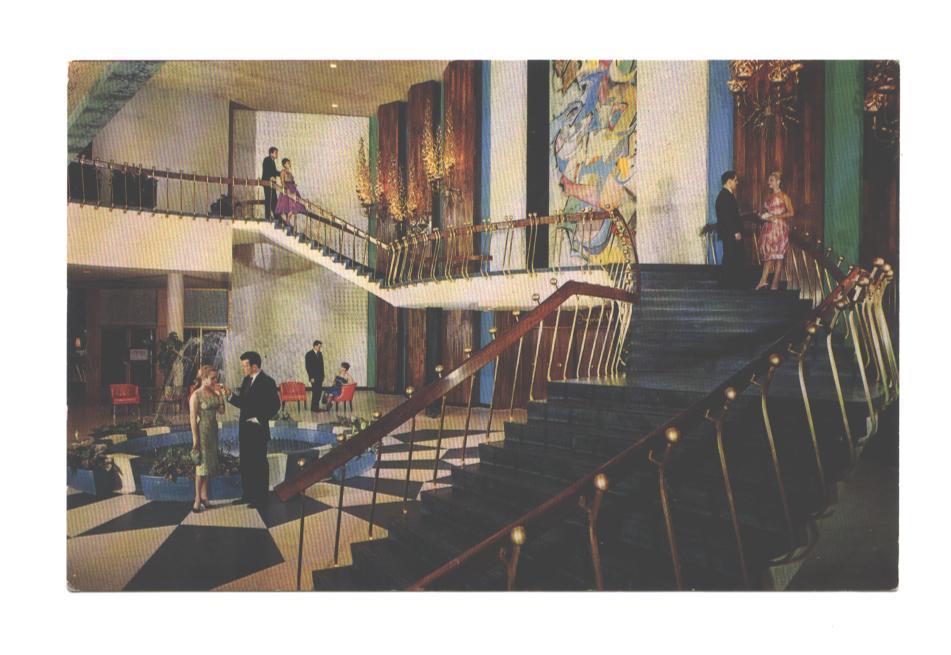 I love the mishmash of decorating styles present here – we’ve got what look like sound-dampening acoustic tiles in the back, bowling alleys fastened to the walls, giant, gold painted sconces with more sharp edges than are now allowed by Federal law, a sweet dancing water fountain and what must be the only piece of pastel modern art in existence at the time. And unless my eyes are deceiving me, the same man is simultaneously courting four different women. Hey, even men with super powers need a little R&R from time to time.

The hotel is still around as part of The Concord Resort & Golf Club. Something tells me the fountain is gone.

Next up on our trip is good ol’ Sin City itself. 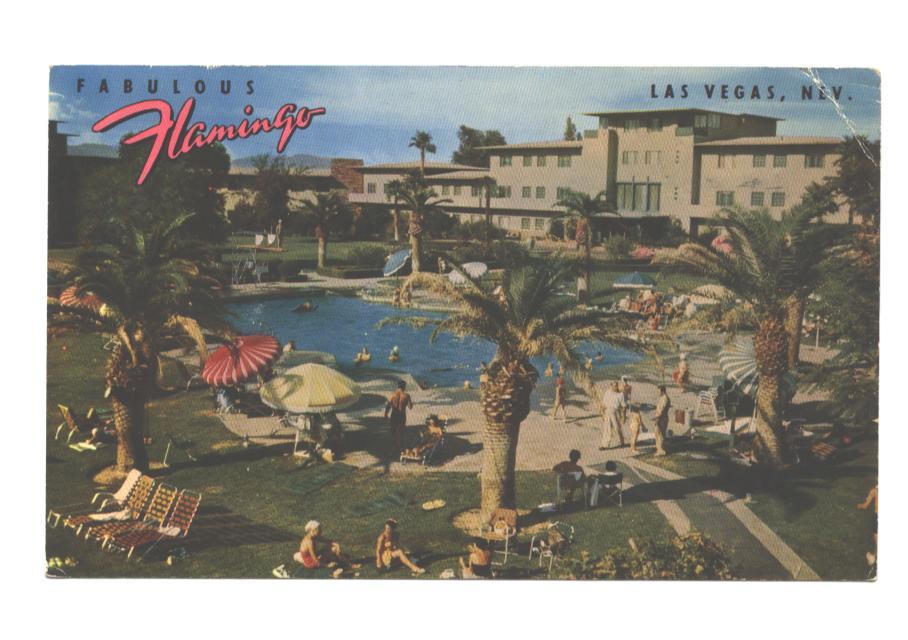 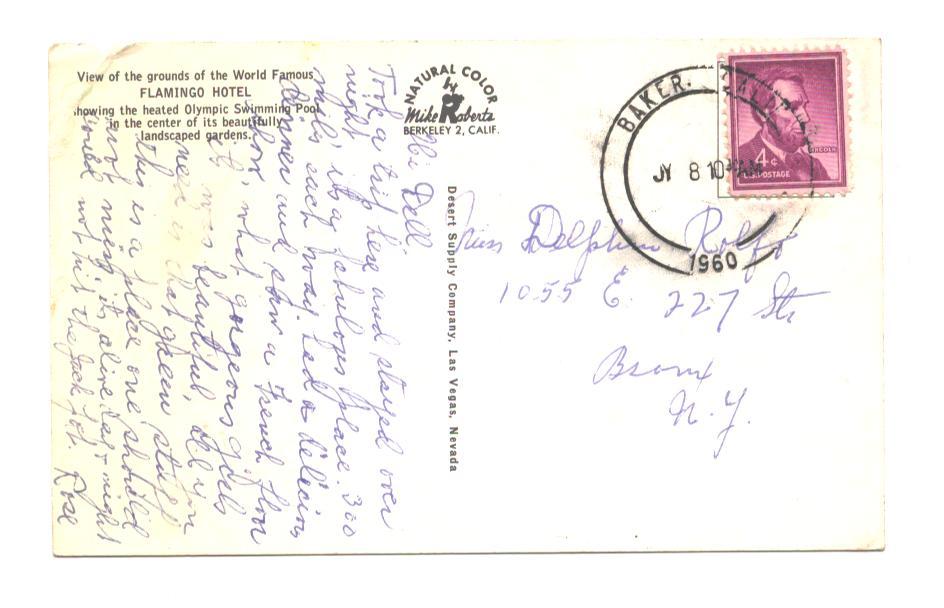 Hey, another Rolfo sighting! Rose picked up this postcard of the Fabulous Flamingo Hotel in Las Vegas in 1960. It is postmarked Baker, California – home of the world’s tallest thermometer! I wonder what the “French floor show” was. Can-Can? Burlesque? Jerry Lewis striptease? Even more cryptic is the “all you need is that green stuff” line. Money for the dancers perhaps? Bok choy for Rose’s Chinese vegetable collection?

Rose and Arthur, jet-setters that they are, spent some time at the Americana in Miami Beach in July of 1966. And although they still found time to write to Delfina back home, they were probably having such a grand time they only managed a few lines. Interestingly, this is the third different way the recipient’s name has been spelled. Not sure what that means. 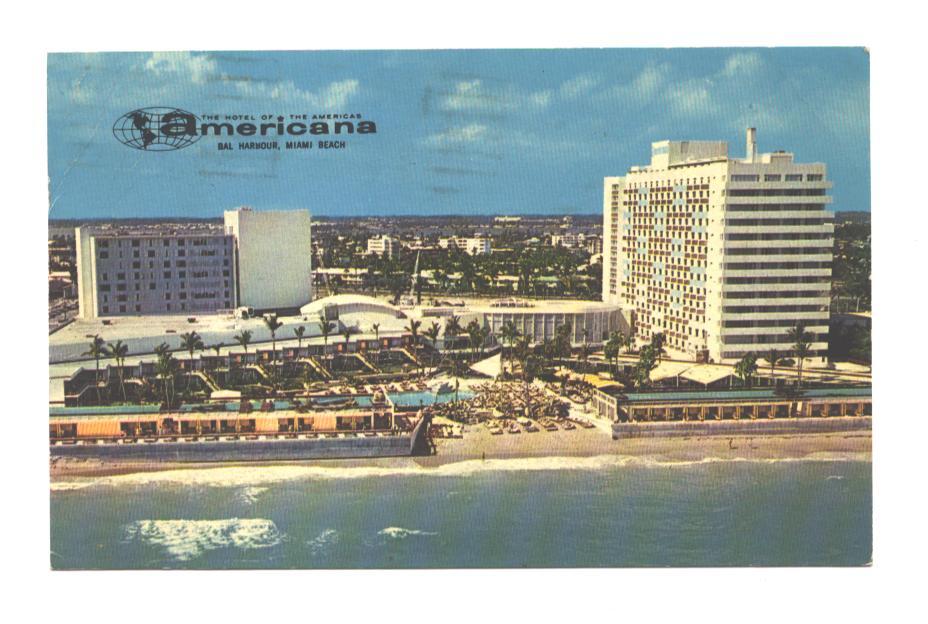 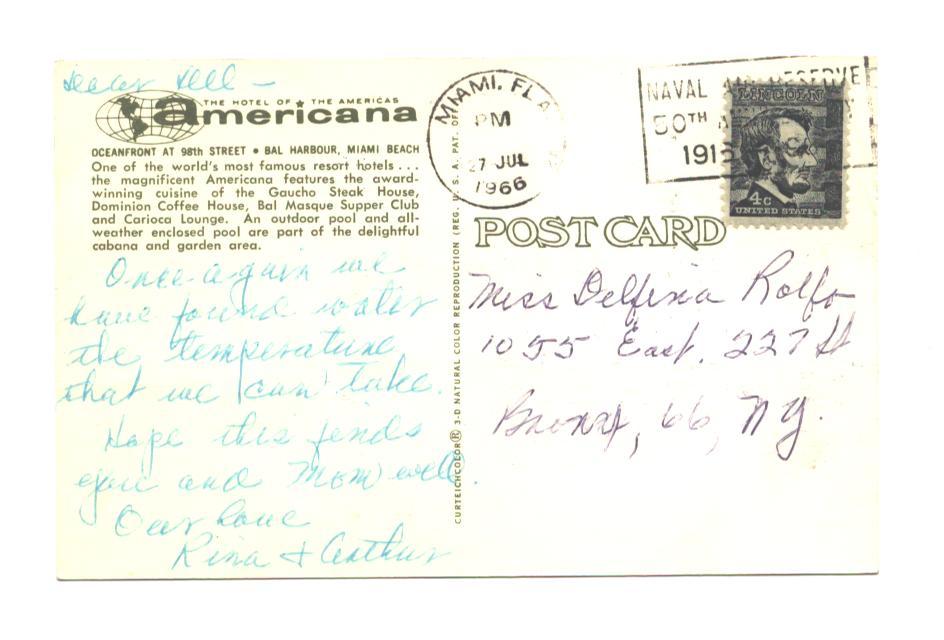 Dateline: Chicago, IL, July 29, 1964. Beatlemania hits Sweden, while Rolfomania hits the Windy City. Dina writes a pleading missive to Delphine, practically begging her to write or visit. Perhaps Dina was the black sheep of the family? 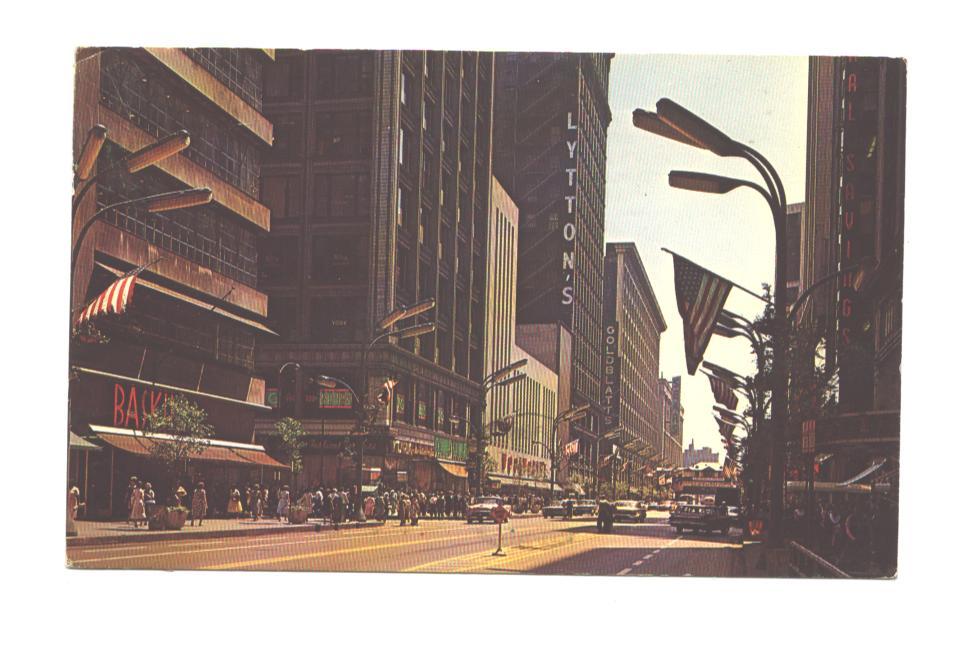 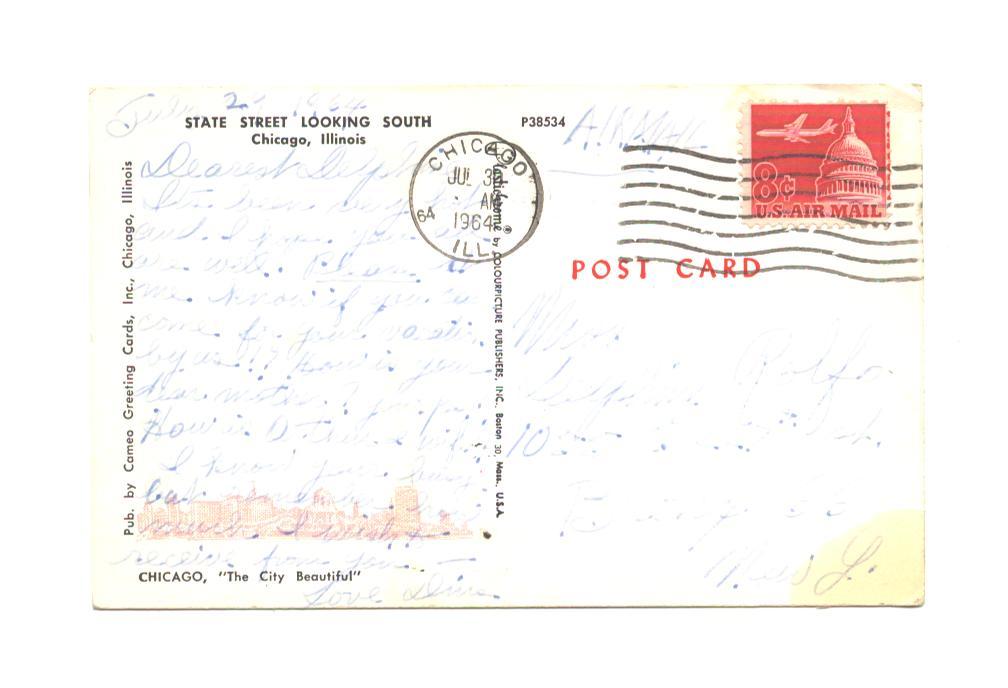 This next entry in the Rolfo travelogue is a beauty – The East End Motel in Madison, Georgia. This probably looked like any of the hundreds of motels of the late 1950s, although the East End had much to recommend itself. Adjacent to the motel was the East End Drive Inn restaurant. Nothing about the cuisine is listed, but apparently they had “Clean Rest Rooms!” 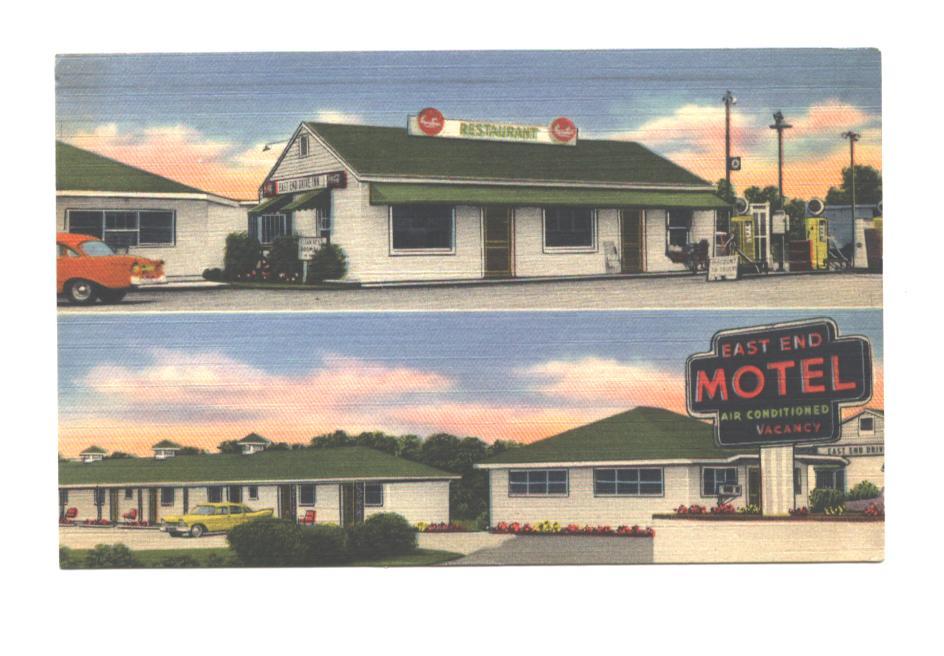 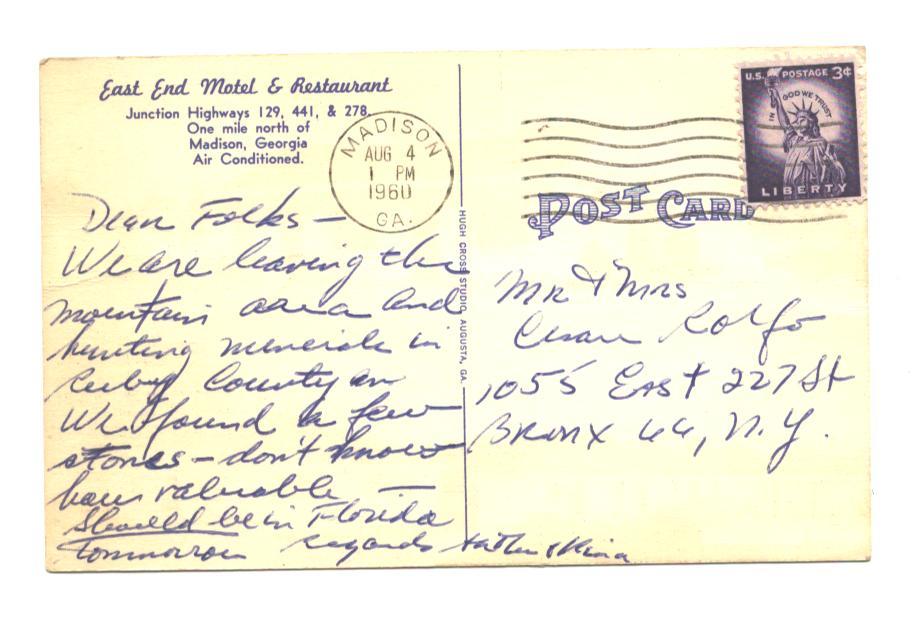 If those gas pumps are still around, they probably command a hefty price tag on the collectors market. I couldn’t find any reference this establishment online, which probably means that the vacancy listed on the neon sign out front is permanent.

Rose stopped by the posh NBC studios in Hollywood in 1958. From the look of the cars, I’d guess the photo was taken sometime just after World War II. Rose apparently loved the studios so much she just couldn’t bear the thought of returning home. 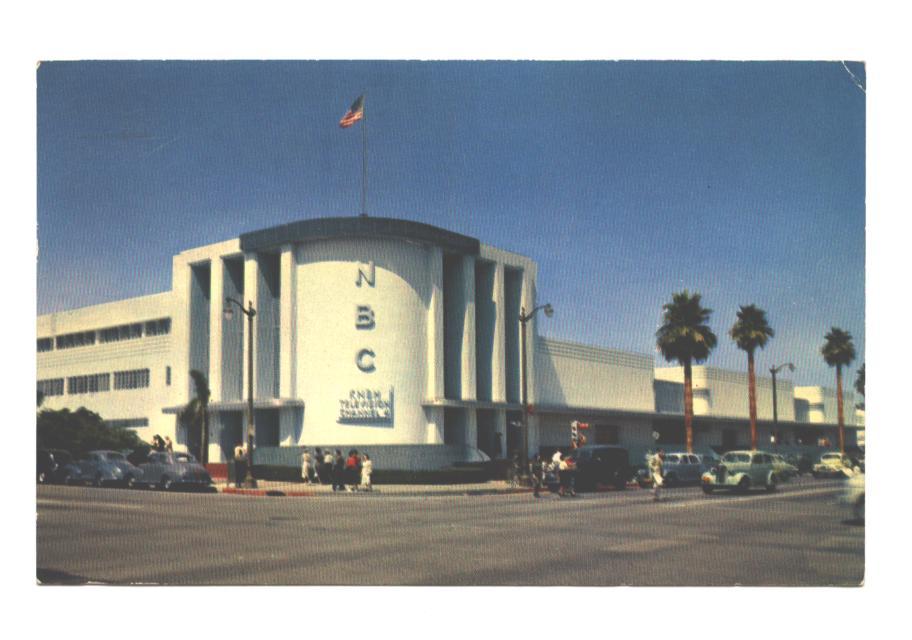 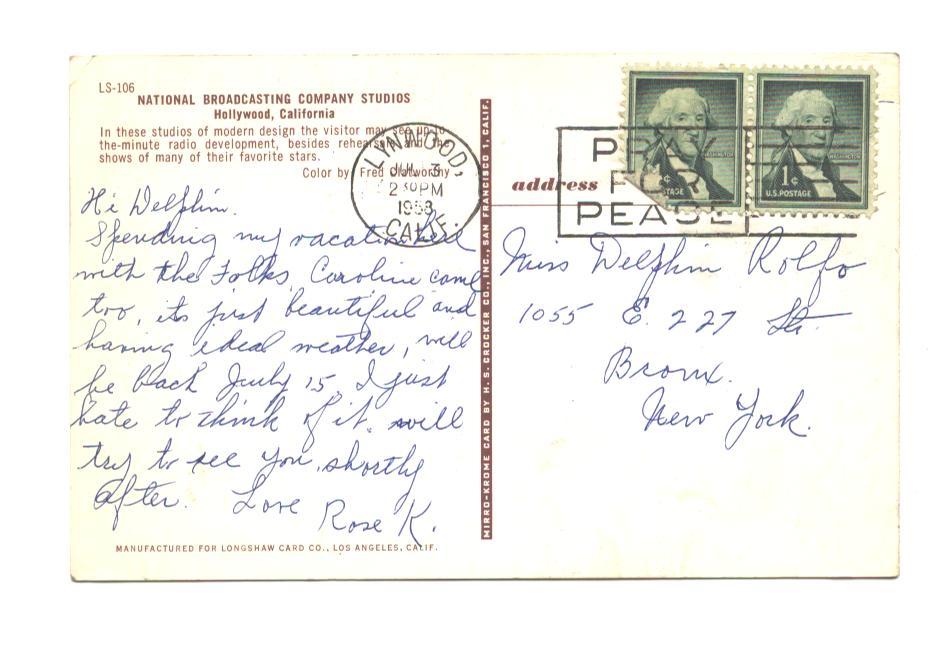 The “Pray For Peace” postmark on this is rather curious; was there an armed conflict of some sort taking place in 1958 in Hollywood that I haven’t heard about? Writers’ strike perhaps?

The “Greetings From…” line of cards is probably what a lot of people conjure up in their minds when they think of vintage postcards. This Los Angeles entry in the series was sent from Bill Primak to Arthur Rolfo in 1946. Bill expresses regret at missing his friend earlier. I wonder if he did get to see Arthur again, as promised? 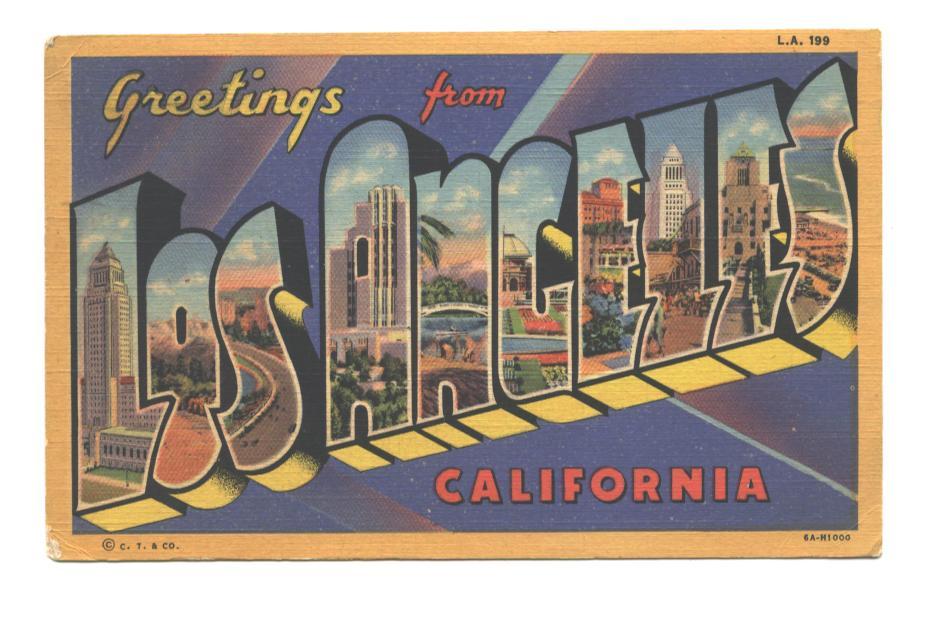 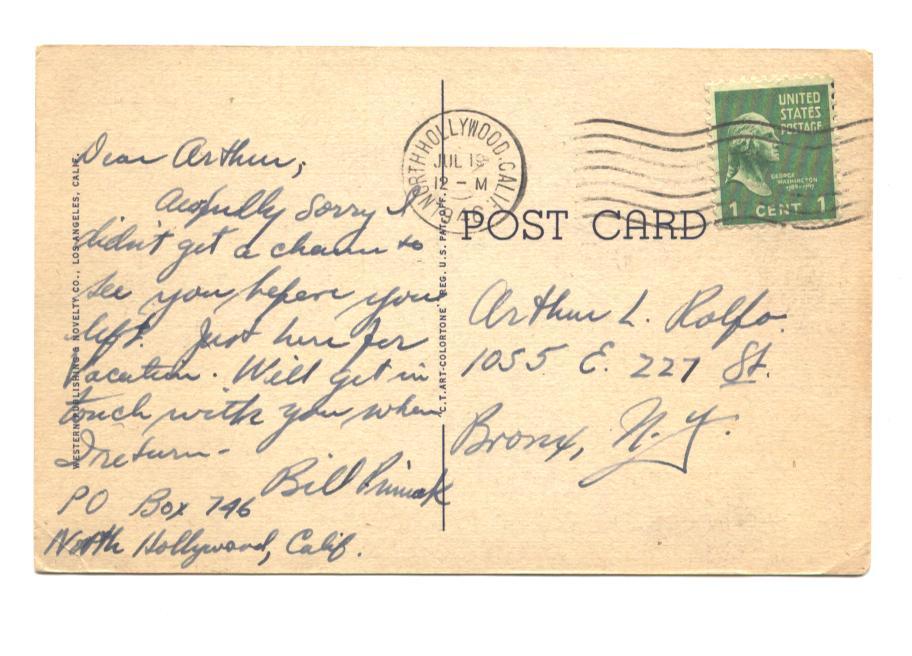 Back to the Windy City we go! Let’s grab a bite to eat in the place with the happiest chairs in the Midwest – the Oriental Gardens! I can only imagine what kind of acts I could watch on stage while supping on my noodles and snow peas. Probably mellow big-band jazz of some sort during the afternoon, swing at night. The Oriental Gardens was supremely confident in itself, stating that “You miss the most important point of interest if you fail to visit.” Well, I’m sold! All I have to do is pick up the phone and call State 4596 for reservations. Care to join me? 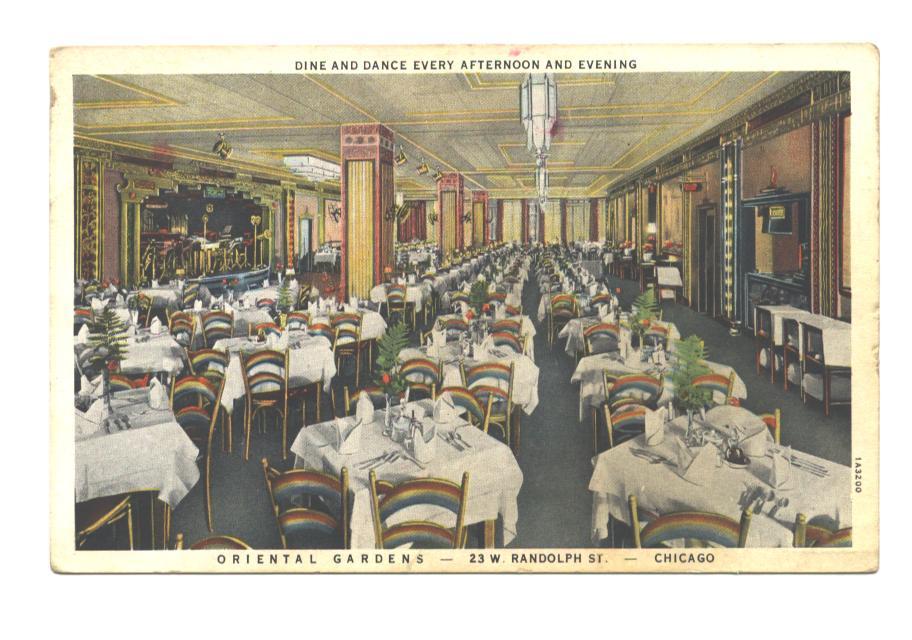 Back on the Eastern Seaboard, we take a stop in the nation’s capital. Schneider’s Cafe was established in 1886, and claims to be as well-known as the Washington Monument. Schneider’s specialty was ‘SEA FOOD’ (say that three times quickly). For some reason, the front of the café puts me in mind of a vintage firehouse. I do dig the green awnings, however. Schneider’s is no longer with us, and I think the urban decline of Washington, DC can be directly attributed to the lack of a decent seafood joint in town. 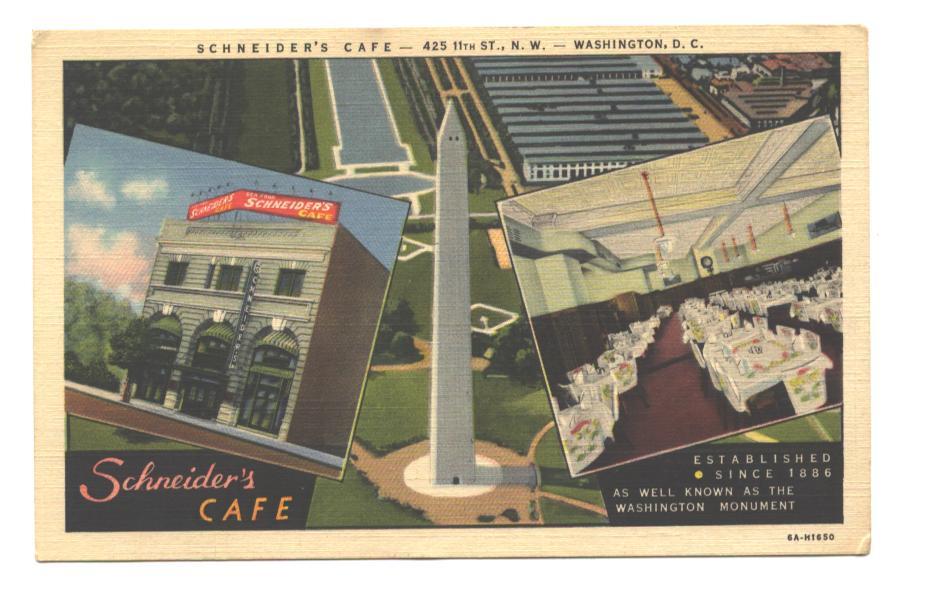 Out last stop is our most surreal. Few things show up less attractively in photographs than meat, but that didn’t phase the owners of The Steak Joint, Inc. They have conveniently provided you with a visual aid on steak preparation, so you can decide how you want your slab o’ meat prepared. I can’t decide myself. Bloody and moldy looks good, but so does bruised in the middle. On the other hand, leathery is not without its benefits. No sir, I think I’ll go for fossilized. Mmmm mmmm that’s good gnawing! 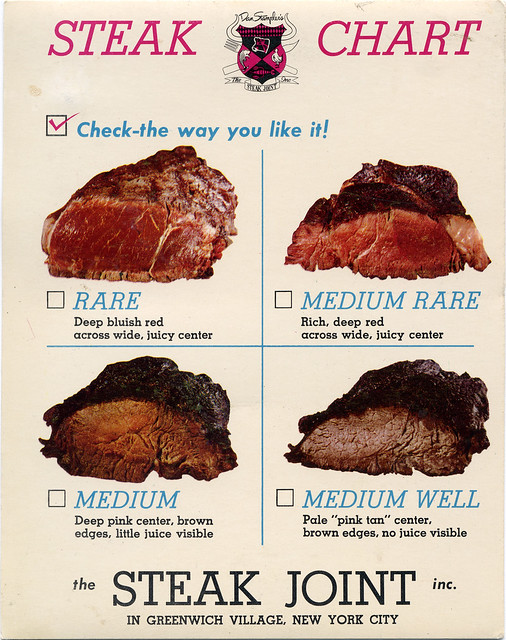 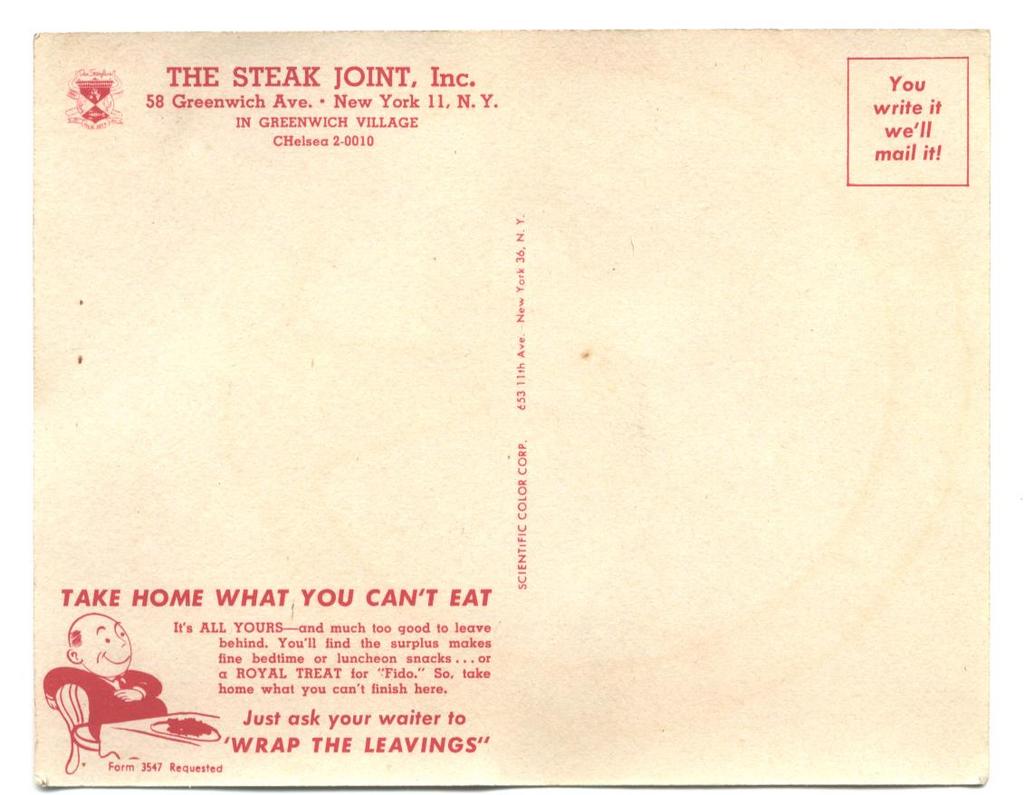 I think the guy on the back is the same one from the Community Chest cards in Monopoly, sans mustache and spats. Had your fill of meat? Just ask the waiter to “Wrap The Leavings.” On second thought, I just lost my appetite.