I don’t want to give away too much of the Best Music of 2011 list that will run in December, but I can say with confidence that the latest album from Tulsa, Oklahoma-based Jacob Fred Jazz Odyssey — Race Riot Suite — will be included.

Race Riot Suite — composed by Chris Combs, the group’s lap steel player — draws deeply from the well of pre-Swing jazz, but incorporates it into a series of distinctly modern arrangements. It’s a remarkable achievement in modern jazz, even without the tragic back story. But once you know the story behind the music, its power is increased tenfold.

In 1921, Tulsa was home to a powerful and affluent African-American community. In one of the largest racial conflicts and cover-ups in American history, massive race riots resulted in the death of hundreds of black Tulsans and the destruction of the entire Greenwood city district, including the area known as Black Wall Street. As explained further on Wikipedia: 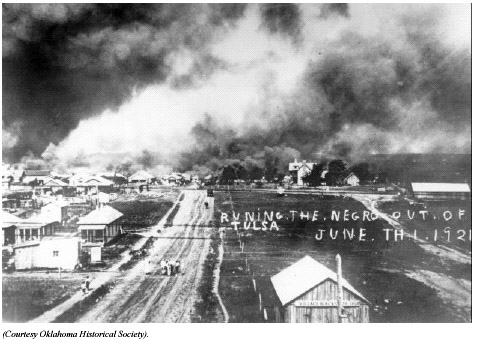 “The riot began because of an alleged assault of a white woman, Sarah Page, by an African American man, Dick Rowland. The Tulsa Tribune got word of the incident and published the story in the paper on May 31, 1921. Shortly after the newspaper article surfaced, there was news that a white lynch mob was going to take matters into its own hands and kill Dick Rowland.

African American men began to arm themselves and join forces in order to protect Dick Rowland. Subsequently, white men armed themselves and confronted the group of African American men. There was an argument in which a white man tried to take a gun from a black man, and the gun fired a bullet up into the sky. This incident promoted many others to fire their guns, and the violence erupted on the evening of May 31, 1921. Whites flooded into the Greenwood district and destroyed the businesses and homes of African American residents. No one was exempt to the violence of the white mobs; men, women, and even children were killed by the mobs. In an effort to completely destroy the Greenwood District of Tulsa, firemen were held at gunpoint by whites making it impossible to put out the flames.

Troops were eventually deployed on the afternoon of June 1, but by that time there was not much left of the once thriving Greenwood district. Over 600 successful businesses were lost. Among these were 21 churches, 21 restaurants, 30 grocery stores and two movie theaters, plus a hospital, a bank, a post office, libraries, schools, law offices, a half-dozen private airplanes and even a bus system. Property damage totaled $1.5 million (1921). Although the official death toll claimed that 26 blacks and 13 whites died during the fighting, most estimates are considerably higher. At the time of the riot, the American Red Cross listed 8,624 persons in need of assistance, in excess of 1,000 homes and businesses destroyed, and the delivery of several stillborn infants.”

(Spotify users — you can listen to these and other featured Sunday Jazz songs by subscribing to my GFS Sunday Jazz playlist.)

Album Cover of the Week: Look At Them Beans »