“That’s all I can stands, I can’t stands no more!” 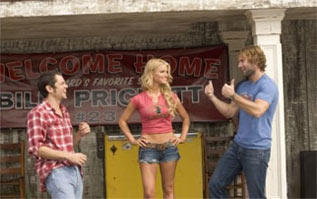 I hadn’t intended to use a Popeye quote, of all things, to start my first blog entry, but such is the capriciousness of life. I decided to start this blog to chronicle my take on Western culture; from the obscure to the popular, from the enriching to the mind-numbing.

Speaking of which, we have been presented with yet another reminder that the collective taste of the American moviegoer seems to be about as sophisticated as the children’s menu at Denny’s. I am referring, of course, to the roughly $30 million (yes, that’s US dollars) that The Dukes of Hazzard managed to swindle over the weekend. I’m still holding out hope that some absent-minded auditor accidentally shifted a comma one number to the right, but something tells me I’m in for disappointment there.

Now, I’m not the type of person who insists that every movie be on par with Doctor Zhivago, but this is really too much. I tried recapping the plot here, but I kept getting this searing pain in my fingers as soon as I got past “A couple of bad actors drive around in a car for a few hours.” The first sign of trouble is that two of the stars of the movie (Johnny “lighting your testicles on fire is fun!” Knoxville and Jessica “air is pretty” Simpson) achieved their greatest notoriety as stars of two separate reality shows on the cultural vacuum that is MTV. Simpson is living proof that Darwin had no idea what the hell he was talking about. The film’s co-star, Seann William Scott (is the second ‘n’ really necessary?), achieved fame in American Pie by drinking a beer containing male ejaculate. On second thought, that was kinda funny.

Anytime a movie like this earns enough money to at least pay for itself, all that does is embolden Hollywood to bankroll a dozen more crapfests like it. Somewhere in California, some hack with a laptop is putting the finishing touches on the screenplay for Riptide.

Chin up, non-mouthbreathers of the world; there’s always next week’s new releases, right?