November 2009 seems like ancient history to me, but that’s when I published part one of my look at some of the most interesting color photos from the 1930s and 1940s (as presented on Flickr by the Library of Congress).  I love looking at pictures like these because even with the most mundane subjects, seeing them in color brings them to life in a way we never could before (unless you were there I guess).

These photos were all taken between 1939 and 1944 by the United States Farm Security Administration (FSA) and later the Office of War Information (OWI).  Just click on a photo to see a larger version. 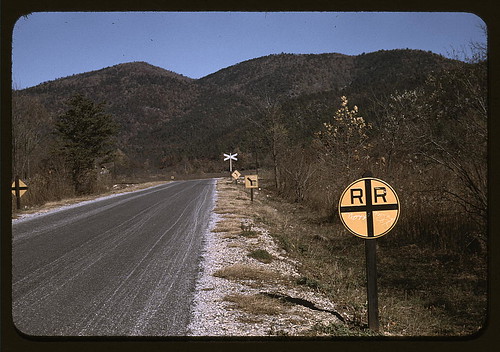 Even in the ’40s no road sign was safe from the scourge of graffiti.  Although as one astute person pointed out, the markings on that railroad sign could very well be so-called “hobo markings”, shorthand communications between wandering workers to let each other know where one could find food, lodgings, etc.  Those of you who have seen the Mad Men episode “The Hobo Code” know what I mean. (Railroad crossing along the Skyline Drive, Virginia – Jack Delano) 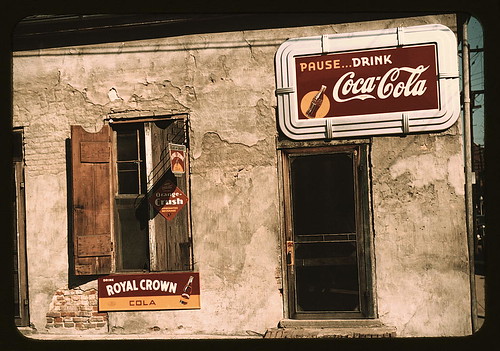 Do you have any idea what the street value of those signs are?  Coca-Cola, sure, but how about those Royal Crown and Orange Crush signs?  The tubby guy from American Pickers would lose his mind if he found these in mint condition.  (Natchez, Miss. – Marion Post Wolcott) 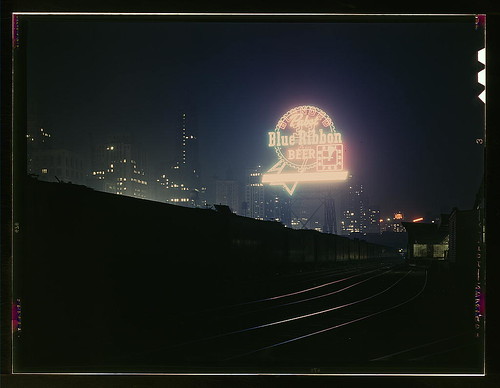 Long before it became a fashion accessory for hipsters, Pabst Blue Ribbon was just a regular beer for regular guys.  That sign would be a sweet addition to any man cave, so long as it had 40-foot ceilings. (Illinois Central R.R., freight cars in South Water Street freight terminal, Chicago, Ill – Jack Delano) 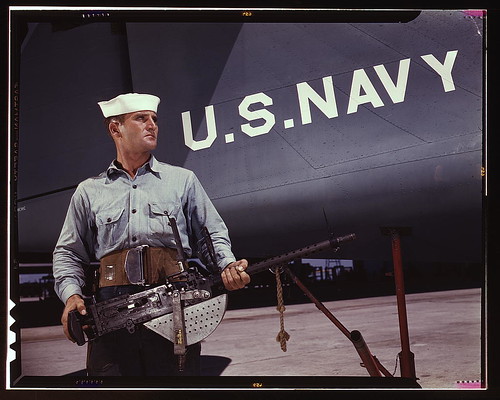 Do you want to screw with this guy?  Yeah, me neither.  If the Navy didn’t turn this into a recruiting poster, they missed a big opportunity. (After seven years in the Navy, J.D. Estes is considered an old sea salt by his mates at the Naval Air Base, Corpus Christi, Texas – Howard R. Hollem) 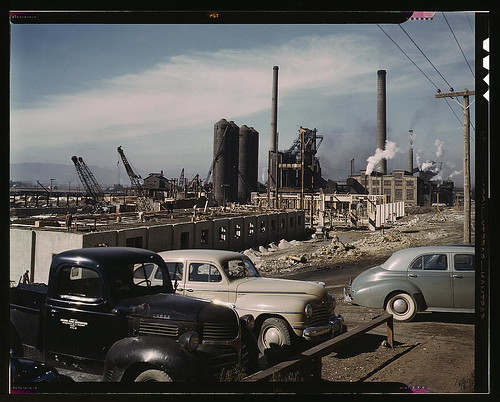 More sweet cars.  So that’s definitely a Dodge pickup on the left, but I’m not sure about the two.  The cream-colored one looks like it could be a Plymouth.  I don’t know.  Man I suck at this.  (Steel and concrete go into place rapidly as a new steel mill takes form, Columbia Steel Co., Geneva, Utah. The new plant will make important additions to the vast amount of steel needed for the war effort. – Andreas Feininger)

« Cross-pollination: Carl Douglas, “Beyond the Wonder” on Popdose

Album cover of the week: Wiegenlied »