The one and only king 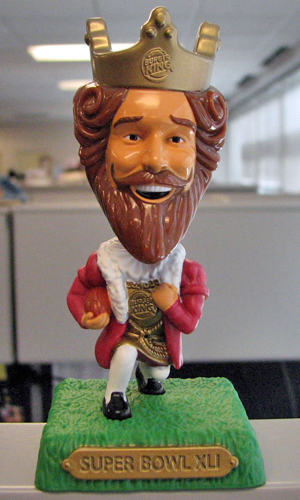 I might as well come clean – I am obsessed with The King. I love all the commercials; the creepier the better. And I just know I’m not the only one. But sadly, there has been a dearth of King-related merchandise. The Halloween mask was made in such limited quantities that it was long gone before I even found out about it. The video games released last year do me no good since I don’t own an Xbox.

So imagine my delight when I found out Burger King was selling Super Bowl XLI King bobbleheads! Sure, I had to buy a Kids Meal to get them but it was worth the momentary embarrassment. I mean, look at it! Alas, I was only able to secure this style and one other before they went away. I’ve seen the rest on eBay, but I cannot bring myself to pay nine bucks in shipping for what amounts to less than a pound of merchandise.

So am I the only King fan out there? I hope not.

6 thoughts on “The one and only king”