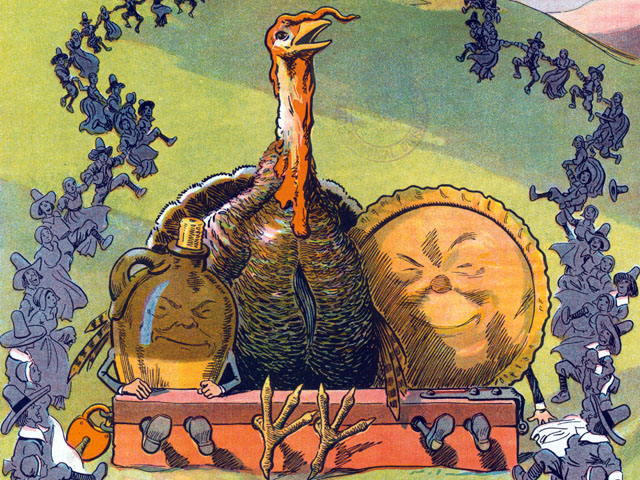 Published from 1871 until 1918, Puck magazine was America’s first successful humor magazine featuring cartoons and political satire. Their Thanksgiving covers, while not always political, usually were and are still fun to look at today even if the relevance has been lost to time. Their choice of makes sense when you know that they were based out of New York City. Tammany Hall, which we all heard about in history class but have since forgotten, figures prominently.

Here’s a selection of Puck‘s Thanksgiving covers from around the turn of the 20th century, courtesy the Library of Congress.

Tammany Hall was a frequent target for Puck‘s cartoons.

That’s newly elected President William McKinley, getting ready to enjoy a turkey carved by Mark Hanna, Republican Senator from Ohio and McKinley’s campaign manager in 1896 and 1900. The “Sound Money” reference had to do with a fierce debate at the time regarding what would back U.S. currency. Proponents of “sound money” wanted currency to be backed by gold, as opposed to backing by either silver or silver and gold.

Here’s some late 19th century New York political satire for you. Sitting at the table, ready to carve up a turkey called “Patronage of Greater NY” is Richard Croker, one of the leaders of the infamous Tammany Hall. The dog is Republican heavy hitter and U.S. Senator Thomas C. Platt. Don’t ask me to interpret the meaning in this drawing.

I’m getting the feeling that the publishers of Puck were not fans of William Jennings Bryan.

I’m sure you recognize Teddy Roosevelt on this cover. I’m guessing this is supposed to be a positive cartoon since he’s about to chop the head off a turkey called “Flim-Flam Finance.”

This isn’t too hard to interpret, just six years before the outbreak of World War I and the dissolution of the Ottoman Empire.

Yeah, I’m not sure what this means.

Your guess is as good as mine on this one too.

Well that’s a quite pleasant way to conclude our little gallery.