Television.  Love it or hate it, it sure beats reading or taking out the garbage.  I don’t post all that frequently about TV on this site, but man do I spend a truckload of time watching it.  So here’s a breakdown of the shows I watched over this past television season, and what I thought of them.  Overall it was a pretty good year, and the spectre of the writers’ strike is already a distant memory. 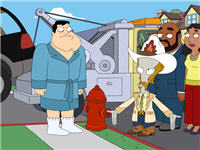 American Dad! – I can only guess that more of Seth MacFarlane’s attention has been directed towards this show than Family Guy, which is the reason it has consistently been the funnier of the two.  Or maybe he isn’t overseeing it, and that’s why it’s funnier.  Either way, this season saw a drop in quality from the previous few but was still pretty good.  Any bit with a Roger/Steve pairing was usually pretty good, but there were good laughs to be had elsewhere as well (Steve and friends facing off against the cool kids at school and the inspired Roger/Hayley costume switching gag to name a few).

One of the best elements of American Dad! is its willingness to explore Roger’s various neuroses and personalities for something other than comedy.  “The One That Got Away” is a prime example – Roger tracks down an unknown crook who maxed out his credit card, and it turns out to be himself living a completely separate life.  This kind of relatively nuanced writing has been done before on AD and I hope to see more of it. Final grade: B- 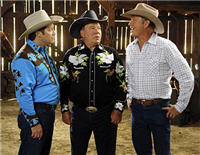 Boston Legal – Dammit, I miss Alan and Denny so much.  I don’t know if it’s accurate to say that a show gets a raw deal when it reaches the magical 100-episode mark, but I still think David E. Kelley and his team got the shaft from ABC.  For my money this was the most entertaining series in years, and it deftly balanced topical drama, emotional character development, and pure oddball humor – often in the course of a single episode.

Sure, things got a little out of hand during the abbreviated final season (particularly with Denny Crane’s eccentricities), but I attribute that more to the writers wanting to go out with a bang than with any creative deficits.  I’m grateful to Kelley and company for tying up as many loose ends as possible in order to provide some level of satisfaction for fans.  Final grade: A

Eureka – It used to be that Mystery Science Theater 3000 was the only reason not to pull the plug on the Sci Fi Channel.  Now, it’s Eureka.  Season 3 brought some pretty seismic changes to the town of Eureka, not the least of which was killing off a main character (the recently redeemed Nathan Stark).  Stark’s death was as bold as it was surprising, although in a town full of super-geniuses I still doubt he’ll stay dead forever.  Elsewhere, the arrival of “The Fixer” at Global Dynamics (Eva Thorne) has opened the door to some of the town’s dirtiest secrets and best episodes.

Eureka can be every bit as formulaic as the next show – basically each week we get to see what the new threat is that can obliterate the whole town, and how the core team of Sheriff Carter, Henry Deacon, and the late Nathan Stark handles and ultimately defeats it.  But even within that formula, this is one of the few bright spots of the summer viewing season.  Grade: A

Family Guy – Ugh.  Has any show ever hit the wall as hard and painfully as this one?  Kudos to Fox for admitting their mistake and bringing the show back in the first place, but things have gone from uneven to unfunny to downright awful. The few bright spots this year have been far outweighed by the crap (Twice with the Conway Twitty gag?  Screw you Seth MacFarlane).  I’m a patient person but I’ve finally had it with Family Guy, so as of now the Griffins are off my DVR schedule.  At least The Simpsons managed to produce 7 or 8 seasons of high quality shows before their gradual decline.  Final grade: D

Grey’s Anatomy – Grey’s gets my unofficial award for most improved show.  Season four found the ol’ gang at Seattle Grace in the doldrums, creatively.  The loss of Kate Walsh and Isaiah Washington can’t have helped.  But this past season was a huge improvement in both the quality and consistency of the writing, helping the show return to a level I haven’t seen since the first two seasons.

The biggest win for the show was the addition of Kevin McKidd as Dr. Owen Hunt, a veteran of Iraq.  Hunt has been the center of some of the show’s most engaging story elements, such as his romance with Dr. Yang and his upstaging of the Drs. Shepherd and Sloan.  Second place goes to the emergence of Dr. Grey, the younger.  Although I’m not totally sold on her romance with Sloan, she brings some much-needed grounding the show.

Oh yeah, Izzy and George died.  Here’s the thing – although Izzy’s visions of Denny ultimately made sense, that whole thing went on far too long.  For me, the beginning of Izzy’s final days (when she was admitted to the hospital as a patient) packed a bigger emotional punch than the end.  And George?  Meh.  He had been so marginalized the last few seasons I’m not all that distraught over his death.  But I will say that the method of his dispatching was pretty damn clever.  Final grade: A

Heroes – The more I watch Heroes, the more I start to question whether or not the generally well-regarded first season (which I loved) was as good as I remember it.  Was the acting as bad as it is now?  Were the plot holes so frigging huge?  Were the writers so absolutely lazy as to completely change character motivations and backgrounds on a whim?

There were moments of redemption to be certain – Danko turned out to be one of the most interesting characters, and he doesn’t even have any powers (not a good sign).  Daphne (finally!) bought the farm, reducing the count of annoying characters by one.

But mostly, the third season of Heroes was about missed opportunities and generally uninspired writing.  Season four is pretty much a foregone conclusion, but I don’t know if I want to bother watching it.  Oh and by the way, the answer is no.  Final grade: C-

House – It’s rare when a drama can be so formulaic but so engaging at the same time.  But unfortunately for the good doctors at Princeton-Plainsboro, things titled a little too much to the formulaic side this season.  What we basically got was a really strong start and a really strong finish to the year, with a lot of meh in between.  Part of the problem is that House’s new team isn’t as strong as the last one, although Taub is the possible exception to this.  They’re not helped by the fact that the old crew not only is still employed at the hospital, but they’re still featured in the opening credits!

Oh yeah, Kutner offed himself.  Sorry, that did absolutely nothing for me.  For one, I never really felt a connection to his character in the first place and two, the whole thing felt forced (which it probably was due to Kal Penn’s real-life circumstances).  And the less said about the super-tacky online memorial to Kutner the better.

I get the sense that House‘s writers understand that they need to shake things up next year, which makes House’s admittance to the loony bin an intriguing setup for next year.  Whether or not they take the opportunity to break out of their routine remains to be seen, but I’m really hoping they don’t do the usual and milk 2 episodes out of it and then pretend nothing ever happened.  Final grade: B-