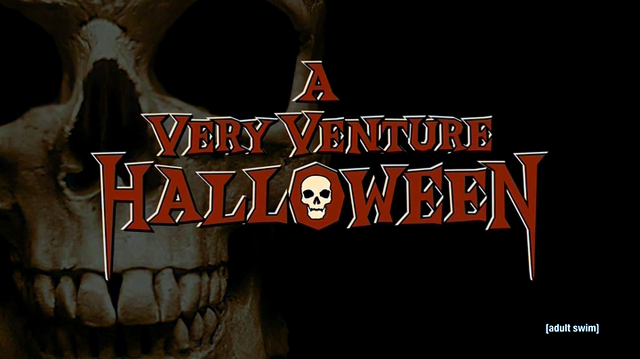 Has it really been almost two years since I last wrote about a new episode of The Venture Bros.? Yup, seems so. And now here we are, with 2012 winding down, and we finally have a new episode from Jackson and Doc — “A Very Venture Halloween.” It’s the first holiday-themed installment of the show since “A Very Venture Christmas” all the way back at the end of season one in 2004.

Alright, enough history — let’s get into it. This episode was damn good, and sets the table quite nicely for the upcoming fifth season of the show. For awhile I thought this was going to be a typically light-hearted standalone episode, but Doc Hammer (who wrote this one) took things in a very dramatic direction toward the end.

Let’s get the frivolity out of the way first — Dr. Venture and Sgt. Hatred hang out with Pete White and Billy Quizboy at the compound on Halloween night to see who can win the most money. You see, they’re betting on which “lucky” trick or treaters can make it past the compound’s deadly security systems. Fun stuff, but nothing too heavy. It was rather nice seeing Hatred and getting zero pedophile jokes, so I hope that continues.

The A plot (or maybe B) concerns the boys and Dermott, who head out to spend the night in a real haunted house — the so-called Potter House. Dean, looking rather goth, is the only one brave or stupid enough to actually go in, and he ends up learning the secret of his cloned past. This was a rather bold move on the show’s part, but I think it’s a great idea. They got all the mileage they could out of Dr. Venture hiding this secret, and it’ll be fascinating to watch the fallout now that it’s out.

The second main plot sees the always welcome return of Dr. Orpheus and the Order of the Triad. They host the gathering of the Brimstone Assembly in Orpheus’s place, and it’s quite the group of mystical figures that shows up. The two best parts of this story were the return of The Master (aka H. Jon Benjamin as Santa Claus) and the Hellraiser spoof with the Outrider and Orpheus’s ex-wife conjuring a Pinhead-esque figure that has a toaster for a face and ejects “pleasure toast.” Awesome.

There’s an Important Lesson for Orpheus and the others here, too, but really the whole thrust of the episode is Dean learning the truth from a newly introduced character named Ben (J.K. Simmons). I imagine we’ll be seeing more of him later, but you never know. I don’t know if he’s going to stick with the sullen goth thing, but I’m damn glad we get goofy Hank back.

If “A Very Venture Halloween” proves anything, it’s that this show seems to still be on its game as it prepares for the fifth season early next year. Damn, I can’t wait!

« Album Cover of the Week: Johnny & The Hurricanes, Stormsville