Venture Bros. wrapup: “Any Which Way But Zeus” 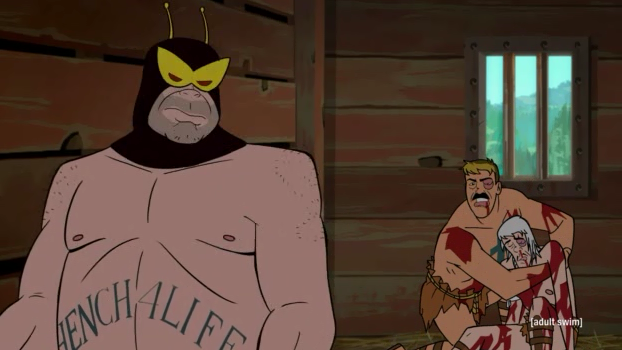 One of the ways you can gauge the strength of a show’s is not how well they produce original plots and storylines, but how they rework old tropes into an entertaining package.  It’s sort of like how Led Zeppelin made the blues into something you didn’t have to force yourself to enjoy.  The Venture Brothers did much the same in its first season by repackaging a litany of hackneyed cartoon plots from the ’60s and ’70s into a wholly fresh enterprise.  Jackson Publick and Doc Hammer migrated away from that more obtuse approach as the series progressed, preferring instead to develop a more intricate, original mythology.

Every once in awhile, however, Doc and Jackson kick it old school and produce a self-contained story that feels more like a fun one-off than a very important episode.  “Any Which Way But Zeus” is one of those episodes, although I don’t think they entirely succeeded in their goal.  I think Doc (who wrote this one) wanted the best of both worlds – a self-contained episode that had the pacing and character development of more myth-heavy entries.

The main plot, ostensibly, is that a mysterious entity calling himself Zeus is kidnapping second bananas indiscriminately – both heroes and villains are his target.  The lone exception is that he captures both Billy Quizboy and Pete White, unable to figure out which one is in charge.  The captured henchmen and sidekicks are then forced to do battle, gladiator-style, in what appears to be an abandoned race track.

To fight this mysterious threat, a truce of sorts is called between the Guild of Calamitous Intent and the O.S.I.  Although truce might be stretching things, as we’ve already seen that these two factions aren’t exactly mortal enemies these days.  Joining them in their quest to find and stop Zeus are a number of lesser guilds and unions, such as Phantom Limb’s Revenge Society and Tiger Shark’s Peril Partnership.  In a setting much like the underground bunker in Dr. Strangelove, this new alliance (under the direction of Gen. Treister) completely fails to accomplish their mission.

The true villain, as it turns out, is none other than former Monarch #1 henchman Scott Hall – last seen in “The Lepidopterists” fleeing certain death at the hands of Brock.  I guess he got away, but I find his reasoning for holding this tournament of death pretty lame.  I did dig the costume, which was sort of an Ancient Greek take on Gen. Klytus from Flash Gordon.

The b-plot is yet another exploration of Rusty Venture’s feelings of inadequacy.  He expects to be nabbed as part of Zeus’s operation, because how can you capture super scientists and not have a Rusty Venture on your mantle?  It becomes pretty clear that he’s not going to be targeted, so Hatred and the boys hatch a scheme to make him feel important.  So they fake a kidnapping and get to torture him a little bit.

We did get a pretty important revelation from Dr. Venture – namely that he feels bad for the life Hank was thrown into, and sees a lot himself in Hank.  It was actually pretty touching, as Hank’s been getting a raw deal ever since Brock left.

The whole thing was funny enough but something was lacking, something I can’t quite put my finger on.  The whole gladiator thing seemed unnecessarily convoluted, and the pacing wasn’t right.  And I’m not sure that anyone needed the return of Scott Hall.  But hey, even when it misses a beat The Venture Bros. is still fine viewing, so there.