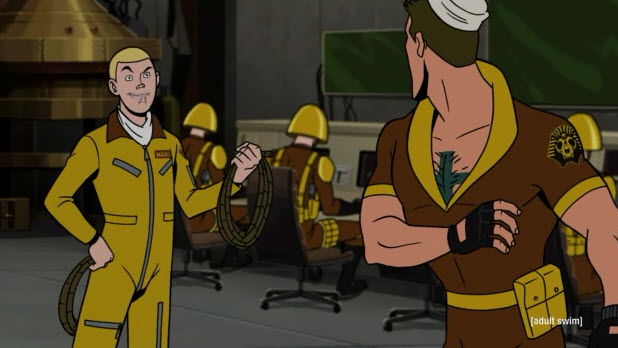 For the second episode of The Venture Bros.: Season 4.5, the action (and the comedy to a lesser extent) gets dialed back in favor of some really solid character development.  It appears to breeze by but on closer examination a lot took place.  Firstly, the boys are finally done with their bed-based education (via the “Nerd Pods”) and are graduates.  Of what, exactly, we’re not sure, as we see when Billy Quizboy attempt to play the role of guidance counselor.

To nobody’s surprise, everyone but Rusty can see that Hank and Dean are ill-equipped to take on the real world.  But really, does that make them any different than the rest of the cast?  Have any of these people ever held down a legitimate job?  Super scientist doesn’t count, unless you really are one and not just saying it.

Actually the one brother who does seem to have it together is Hank, who overcame his Batman obsession long enough to put on a solid tryout for S.P.H.I.N.X.  They reject Hank despite the glaring lack of good recruits, and despite being careless enough about quality to have their entire communications system hooked up to a single extension cord.

Dean seems well on his way to becoming a diluted version of his father, who is in turn a diluted version of Jonas Sr.  Not even a trip to good ol’ State University stokes the fires of his imagination, and his rejection is yet another humiliation he must endure.  Although it’s hard to say he was rejected when it turns out he didn’t even apply (“We didn’t see the need to burden you with more paperwork.”).

On the villainy front, I enjoyed the Phantom Limb storyline as well as his seeming return from the brink of madness.  Well, at least to a degree.  At least the shoe and the toaster got to kick some Guild butt this week.  I have to say that outside of the Monarch, Phantom Limb is probably my favorite villain in the Ventureverse.  His partnership with Dr. Richard Impossible (now voiced by Saturday Night Live‘s Bill Hader) holds some promise, even if it is a little lopsided.

And hey, Baron Ünderbheit is back!  Sure it was only for a few minutes, but still – Baron Ünderbheit!  I wouldn’t expect too much from him, though, as Doc and Jackson are on record as not really liking the storytelling possibilities for the now-deposed Baron.

The writing and storytelling, as usual, was first-rate even if the laughs weren’t abundant.  I applaud Jackson and Doc for having the courage and chops to keep developing their main characters and to take them in unexpected directions.  It would’ve been really easy for them to keep cranking out safe, jokey, insular episodes like “Tag Sale – You’re It!”, but I suspect we all would’ve gotten bored with that after awhile.  And if nothing else, I’m never bored watching this show.

« Idiot of the Week: Braylon Edwards