OK, so not every episode can be a stone classic.  I said last week that I like the more self-contained Venture Bros. episodes and I stick by that.  But this one felt a little disjointed until the last few minutes.  Maybe it’s Doc Hammer’s approach to the source material.  Don’t get me wrong though, there were plenty of good moments and laughs.

Maybe part of the problem is that with three separate storylines to focus on (Sgt. Hatred and Rusty trying to save the boys, the boys contending with a grief-stricken Henchman 21, and the Monarch in desperate need of some Benadryl), there was simply too much ground to cover.  I’m not sure what I would’ve cut, but I think the Hatred/Rusty bit felt the most flat.  After earning some redemption in my eyes over the course of the season, Sgt. Hatred was probably the weakest link this episode. 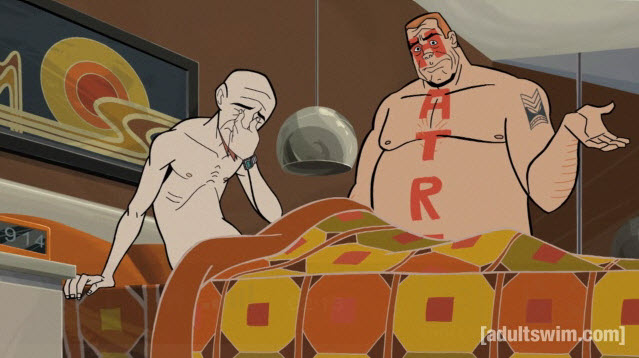 The cold open has 21 talking directly about 24’s death (it was a car intentional) for one of the few times this season, and it also revealed the newfound respect he’s earned from his fellow henchmen.  Hell, even the Monarch is singing his praises for increasing the efficiency of his operation (I guess he’s like a Six Sigma black belt of villainy).   But then we see that 21’s grief has morphed into something bordering on insanity, as he still carries on the same inane discussions he had with 24 – only now he’s talking to 24’s burned skull.  Yikes.

21 puts his plan to avenge 24’s murder (“An Eye for an I”) into effect, and he starts working down his list of suspects.  Up first is the Ventures, which means a trip to the compound.  Disguised as Sgt. Hatred, 21 kidnaps the boys with surprising ease, even if his exit isn’t so smooth.  He brings them back to his (*sigh*) tree fort for some well-intentioned but bungled torture.  You just know Brock would’ve put a stop to this crap right away.

Back at the Monarch’s lair, the Monarch has developed quite a food allergy and his face morphs into the Elephant Man.  Something about the scene with Mrs. Monarch outside the bathroom door didn’t look right – she seemed weirdly underdrawn, and I can’t help but wonder if some censorship wasn’t in action.  Oh well.

And back at the compound, Sgt. Hatred is at wit’s end with the boys’ seeming disinterest in preserving their own lives.  He turns out to be just as guilty, however, as he’s felled by one dart whilst enjoying computer porn.  I don’t even want to know what kind he was looking at.  Anyway, Hatred wakes Rusty up and they had back to Malice, the gated community for super-villains that Hatred used to call home until his divorce from Princess Tinyfeet.  After dispatching the robotic guard in surprisingly efficient fashion, Hatred leads Rusty to his former home to grab some gear.  It’s there that he witnesses a sight that reduces him to tears and back to his ineffectual old self.

Oddly enough, what made this episode work in the end was pathos and genuine emotion.  The scene between 21 and the Monarch was surprisingly sweet, while it was nice to see Rusty and Mrs. Monarch have a regular conversation for once.  More than the jokes, the moments when the characters let their guard down made for some great viewing.

What remains now is the question of who put the checkmark on 21’s list?  And who moved 24’s skull?