I’m a week behind on recapping the latest VB installment, but since last night’s episode was a repeat of the season premiere it’s all good.  So without any further preamble, let’s get into it.

The formula for “Self-Medication” is vintage Venture – some intense action (particularly during the cold open), and some further exploration of the larger theme of failure that permeates the entire VB universe.  And by the time we’re done, some major characters find themselves at a crossroads. 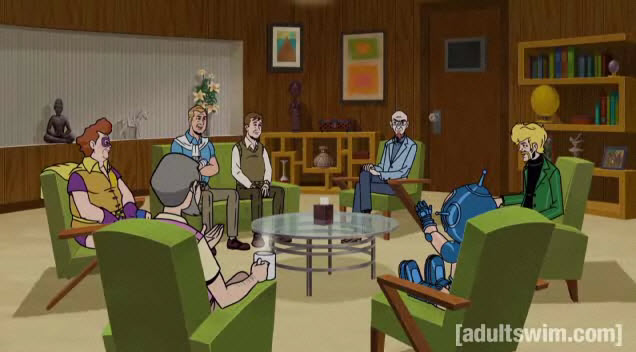 First up is good ol’ Doc, who nearly meets a gruesome end at the hands of a newly emboldened and energized Monarch (how can you not love a device called a ‘scarionette’??).  Rusty is literally saved by the bell, when a fortunately timed therapy appointment triggers a new Guild clause (the Mental Health Arch Exclusion) and leaves the Monarch with a case of villain blue balls.  Rusty’s issues are deep and varied, as fans know by now, but I have to say that the scene of little Rusty sharing his anxieties with Jonas Sr. was one of the more pathetic moments in series history.

So now Doc finds himself in a therapy group for former boy adventurers, which manages to make the recovering henchmen group look stable and with it by comparison.  Of course there’s Action Johnny, but we meet some new characters – Wonder Boy (a sweet cameo from Patton Oswalt), now all grown up (physically) and bitter about getting the boot from Captain Sunshine; former boy detectives the Hale Brothers, one part Hardy Boys and one part Menendez Brothers; and Roboy, owner of some serious anger issues and an unfortunately placed reset button.

Johnny makes some headway on his dependency issues, until the therapist dies from a snake bit (a Vietnamese Two-Step Viper, to be precise).  So just as Rusty gets started on his own healing path, he gets cockblocked just as the Monarch did in the opening.  While the adventurers deal with the snake in their own idiosyncratic ways, Johnny takes the opportunity to boost some prescription pads.  They get into a hilarious bar fight, and finally confront their prime suspect – Dr. Z.  But leave it to Z (voiced by Seth Green this episode) to talk some much-needed sense into the gang, and finally wake Rusty up to reality.

Rusty, as well as the rest of the family, has been doing some real growing up without Brock around to coddle them.  But in this episode Doc makes his biggest realizations about himself and his life since the excellent “The Doctor Is Sin” episode.  Unfortunately for Doc, his newfound confidence now opens the door for the Monarch to resume his henching.

The B plot is one that seems to be garnering a mixed reaction from the fan community, as once again Sgt. Hatred’s pedophilia is brought to the fore.  But rather than just returning to that particular well for humor, Jackson makes a bold play and tries to ratchet up the sympathy vote for Hatred.  And the strange thing is, it kind of works.

It’s clear that Hatred doesn’t want to act on his impulses, and knows they’re evil, but feels powerless to stop himself.  So he ditches Hank and Dean at the movies and locks himself in the panic room since OSI is either unable or unwilling to get him more meds (I’m guessing Nomolestol isn’t OTC).  Only a clever ploy by the boys gets him out, and he’s taken down by the Monarch’s henchmen to be left to an unknown fate.  I’m guessing that Jackson and Doc know that they’ve gone about as far as they can with Hatred, so my money is on him exiting the show soon to pave the way for Brock’s return.  But of course I’ve been wrong so many times about this series.

So yeah, this wasn’t an episode of the ages but it was damn solid with some very funny parts.  It’s hard to believe we’re almost halfway through the season.