So how do I go about getting me one of those Statutory Ape t-shirts? Or for that matter, an Innerspace

Anyway, we are finally ready to resume the fourth season, and “The Diving Bell vs. The Butter-Glider” does it in classic style.  No heavy myth exploration, no huge character growth, just lots of great dialogue and action.  And that’s a great way to dive back into the show. 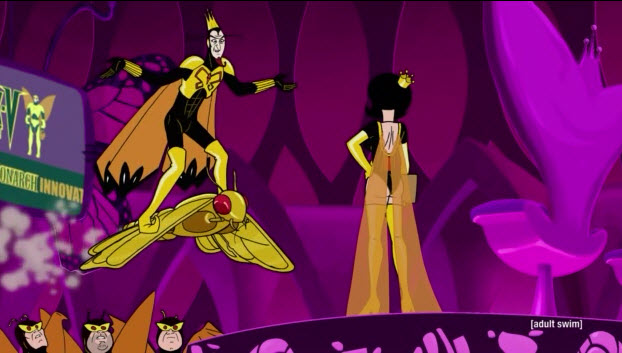 So about the title – it’s an homage to a novel called The Diving Bell and the Butterfly, about a man who awakes from a coma unable to communicate other than by blinking his left eye.  That’s pretty much how we find ol’ Rusty at the beginning of the episode, except that he’s in Sgt. Hatred’s jeep and is being trailed by the flying cocoon (piloted by 21, on his first solo command).

The main plot involves a classic cartoon gag, namely a takeoff on Fantastic Voyage.  Using Billy Quizboy’s shrink ray, Brock, Shore Leave, and the Venture Brothers take a submarine trip through Doc to find the cause of his paralysis.  They make a rather disturbing discovery along the way, one which may have ramifications later.  But more importantly they find the blood clot causing the problem, and head back out for extraction.

Meanwhile, the Monarch’s henchmen are unhappy.  They’re sorely under-equipped for proper villainy (especially now that Brock’s replacement, Hatred, is so trigger happy), and are tired of getting whipped.  So 21, who seems to be more assertive and competent all the time, takes the opportunity to pitch a new idea to Dr. Mrs. The Monarch – the awesome Mark V Hench-Suit (cougar roar!).  It’s loaded with retractable wings, body armor, and an array of offensive weapons (the best of which is the Pain Onion).

21 gets denied, but the insult is when the Monarch flies in with his new, multi-million dollar toy – the Butter-Glider.  It is a pretty sweet accessory, but other than making the Monarch feel good it does little but piss off the henchmen and his wife.  Oblivious to their concerns, he takes to the skies for a musical number that recalls the Lois Lane dream date sequence from the first Superman movie.

When the Monarch’s affection for the Butter-Glider reaches disturbing new levels, DMTM hatches a scheme to bring him back to earth.  She encourages 21 to lead the henchman on strike, and to attack the Venture compound in order to snap the Monarch out of his puppy love.  The plan works, and the Monarch ones again has Rusty in his clutches – only to be foiled by that damn shrink ray.

There was a lot to enjoy in this episode.  The pacing was nonstop and there was a good balance of gags, jokes, and more serious bits.  I loved the King Gorilla welcome home party, even though it was a bit sad to see him in such a bad way.  Anytime a crowd of super villains has a party, it’s a gold mine of material.

I also enjoyed the whole motorcycle separation sequence with Billy and Pete White.  It reminded me of the nozzle gag, just more fleshed out.  White also had a good bit of dialogue with the Monarch, as they briefly reminisced about their college days together.

Overall, I really enjoyed this without repeated viewings and it’s a great way for Jackson and Doc to bring us back into the flow of things.  Go Team Venture!