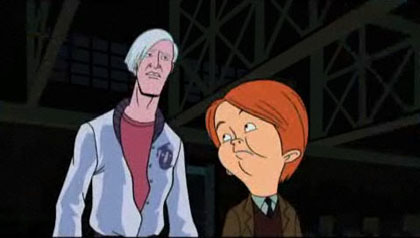 I came to an important realization while watching last night’s episode of The Venture Bros. – of all the characters in the Ventureverse, the pair of Pete White and Master Billy Quizboy is my least favorite. So read my take on this episode with that in mind.

As with the premiere episode of the season, “The Invisible Hand of Fate” is devoted to flashbacks intended to provide insight into some characters (in this case, the aforementioned Pete White and Master Billy Quizboy). We learn that the pair were in cahoots on a quiz show (Quizboys, which White hosted) in a setup obviously recalling the 1950s game show scandals. When Billy’s scam is uncovered, the pair are exiled and take to the underground quiz circuit to raise money for a trip to Venture Industries (where they hope to gain employment).

Meanwhile, Col. Gathers of OSI and his protégé, Brock Samson, are trying in vain to prove that the secretive organization known as the Guild of Calamitous Intent is not only real but still very much active. They enlist Billy, who has split from Pete White in anger, to infiltrate the classroom of State University’s Professor Fantomos, a suspected Guild recruiter.

Billy quickly gains Fantomos’ confidence and becomes his lab assistant (after the suicide of his predecessor, Stevie). But Fantomos is unwittingly betrayed by Billy’s cheating, and the Phantom Limb is born. In the fallout of the incident, Col. Gathers is transferred to Guam and Brock receives a new assignment that is ostensibly as Dr. Venture’s new bodyguard. But before that happens, he delivers Billy (with his memory wiped) back to Pete White.

In a side story, we see the moment when Dr. Venture’s previous bodyguard, Myra, becomes totally unhinged and is fired. And honestly, I’ve never found her character remotely amusing so if that’s the last I see of her I’m down with that.

To be fair, maybe the fact that I don’t care for the two main characters of this episode led to the lack of enjoyment. But really, I think there’s only so much detail and backstory that I need on some of the show’s characters, and this felt like too much. It wasn’t a bad episode, it just felt rather flat. Oh well, on to next week! (and please, more Dean and Hank?)