I’ll get the unpleasantness out of the way right now – the Billy Quizboy/Pete White-centric Venture Bros. episodes need to stop for awhile.  Billy and Pete are not nearly as interesting as Jackson and Doc seem to think they are, and diving deeper into their pasts, their relationship, or their neuroses doesn’t really make for compelling television.

Oh yeah, and I didn’t see a Monstroso-heavy plot coming.  Not sure they really know what to do with the character, outside of the deep voice and jokes about his size.  Isn’t he really just a more normal version of Baron Ünderbheit, a character they ditched for a few seasons? 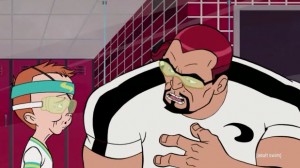 But rather than harp on that too much, I’ll focus on what I did like about “Silent Partners”.  The Investors, the wraith-like men who can rip out your heart Temple of Doom style, are pretty damn cool and menacing.  I really hope they get to keep the air of mystery that the Guild no longer has.

I also appreciated Hunter’s little explanation of why SPHINX (SPHINX!) exists (“if they’re dressed regular and pointing a super laser at your daughter, that’s when you call SPHINX).  I wasn’t really sure myself, but their place in the Ventureverse makes a little more sense now.

Oh, and it’s good to see the Sea Captain back on deck where he belongs.  And hell yes, he’s a Degrassi fan too!  And he also thinks poor dead JT got a raw deal!  That’s the sort of payoff moment that keeps me coming back to this show.

But overall?  Meh.  Some good lines, but a story I didn’t really care about involving a bunch of supporting characters.  I appreciate the need to flesh out people other than Rusty or the boys, but this was the first major letdown of the season.