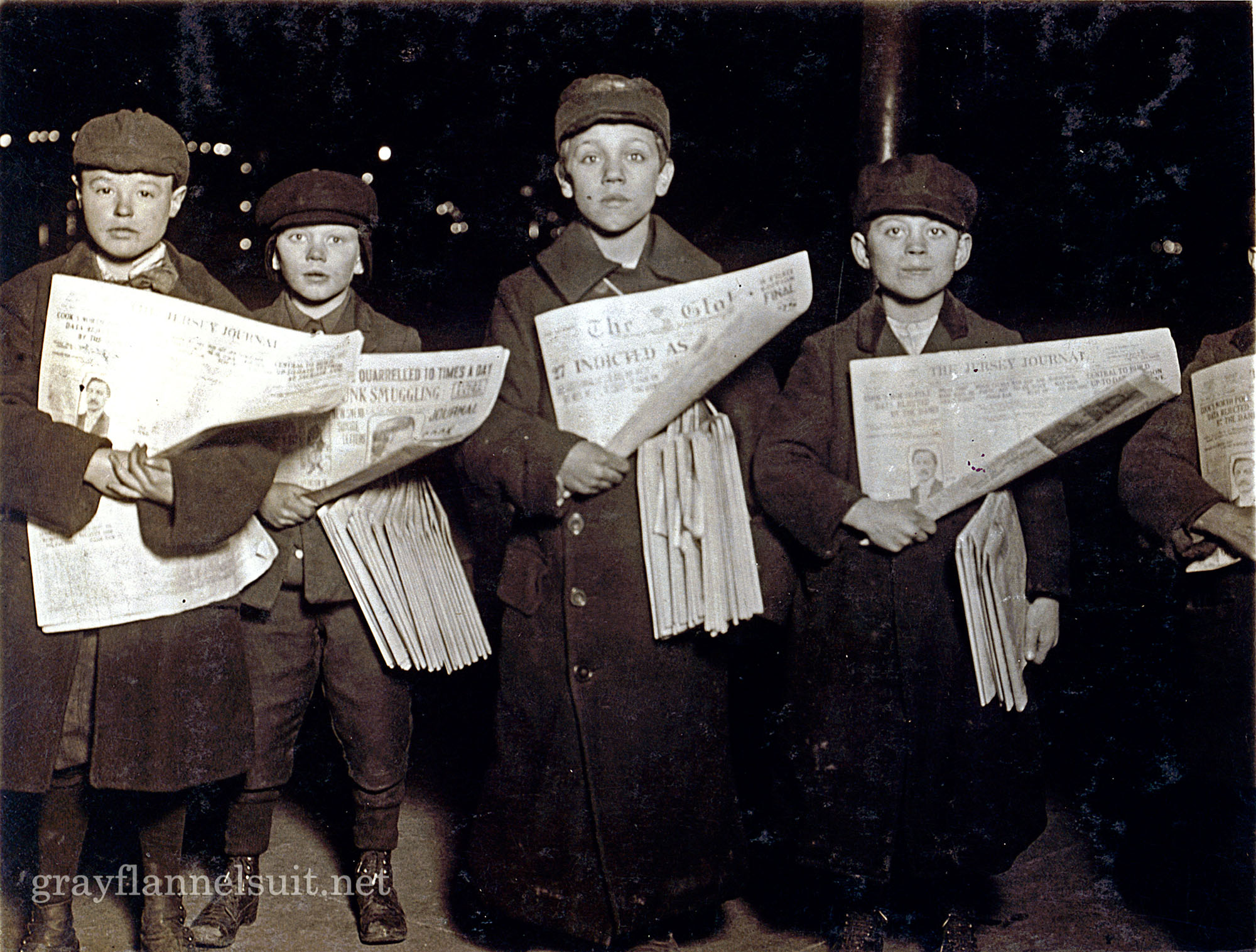 Starting this week I’m going to start featuring more vintage photographs from my home state of New Jersey — the good, the bad, and the just plain neat. It’s a great opportunity for me to both share and learn more about the Garden State, so save your mob/pollution jokes please.

As with most of the other photos I’ve shared, I’m going to attempt to clean things up a bit. I’m no Shorpy but I do what I can.

This week’s image was taken by Lewis Wickes Hine, who shot countless numbers of pictures depicting child labor at the turn of the century and later. This photo shows a group of newsies hawking papers at the Hudson Tunnel Station in Jersey City in December 1909. From the Library of Congress page description: “Newsie selling at the Hudson Tunnel Station, Jersey City. Boy on left is Patrick Drohan, 37 Susex St., 12 yrs. old. Next to him Stanley Fazurowski [i.e., Fozurowski?], 9 yrs. old. Largest boy is 13. Location: Jersey City, New Jersey.”

(Click for the full-size image in a new tab.)

In addition to the vintage duds (dig those boots!), I see two different newspapers here. Three of the newsies are selling copies of The Jersey Journal, which covers Hudson County and has been in publication since 1867. The taller kid in the middle looks to be holding The New York Globe,  which published from 1904 until it was bought and merged into The Sun in 1923.

Based on the location of “Hudson Tunnel Station,” these boys appear to be stationed near the Jersey City side of the newly opened Downtown or Uptown Hudson Tubes. The Tubes were the first non-waterborne link between Manhattan and New Jersey. The tunnels currently PATH trains.

I can’t quite make out the newspaper held by the second child from the left, and nothing in this photo gives away the date. However, similar photos that appear to be from the same session are dated December 21, 1909.

« Ads from the Open Road, Volume 1

Seattle, Welcome Back Your NBA Basketball Team With a New Logo! »