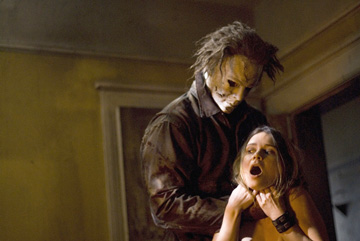 If you’re so inclined, scoot on over to Yahoo! Movies and check out the trailer for Rob Zombie’s remake of Halloween. I could go either way on this one – I do so love the John Carpenter original, and am doubtful if remake is really needed. On the other hand, I know Rob Zombie is a huge horror fan so I think he will treat the material with respect.

There are, of course, some major ingredients missing that could spell trouble. Instead of an unknown and fresh-faced Jamie Lee Curtis redefining the role of Scream Queen in what was her debut movie, Laurie Strode will be played Scout Taylor-Compton, who it seems has already built a sizable resume. I hope that experience doesn’t prevent her from portraying the innocence that is crucial to the character.

Also missing will be the late Donald Pleasence, who absolutely stole the show in the original movie, as well as most of the unfortunate sequels. Taking his place, luckily, is the formidable Malcolm McDowell. Based off what little material I’ve seen of the 2007 Halloween, it looks like McDowell will be playing the irritable Dr. Loomis as Pleasence did. That’s a good thing, although I doubt we’ll be treated to such Pleasence-isms as “The ev-ill is loose!”

The only other thing I can tell from the trailer is that, like most modern horror movies, Halloween will feature a lot of sculpted, ultra-nubile teenagers. While that’s not a bad thing, it’s unfortunate. Back in the day, teenagers in horror movies (or the adults who played them) looked like average kids, not models. It helped lend an element of realism to otherwise fantastical flicks.

So I’m gonna go out on a limb and say that the Zombie-fied remake of Halloween could be a really good update of a classic, or it could be another entry in an already long line of pointless Hollywood remakes.