It’s been nearly 40 years since Gene Simmons, Paul Stanley, Ace Frehley, and Peter Criss put greasepaint on their faces and took the stage as Kiss for the first time. Since then they’ve amassed 24 gold albums in the United States, took the makeup off, got a bunch of new members, put the makeup back on, and toured seemingly in perpetuity.

In those four decades a lot of facts, rumors, and myths about Kiss have circulated. Of course the diehard members of the Kiss Army usually know what’s what, but for everyone else, here are ten things you probably didn’t know about Kiss.

Before she gained fame with American television audiences for her portrayals of Peg Bundy (Married… with Children) and later Leela (Futurama), Sagal juggled a music career with bit parts in TV movies in the early ’70s. She sang in a short-lived act called The Group With No Name, which released one album on Casablanca Records (Kiss’ label at the time) in 1976.

Sagal also sang backup for artists such as Bob Dylan, Tanya Tucker, Etta James, Molly Hatchet, Olivia Newton-John, and Bette Midler. She released solo albums in 1994 and 2004, and contributed a song to the Sons of Anarchy: Shelter EP in 2009.

9. Only two members of Kiss played with the band using their given names.

8. Paul Stanley briefly abandoned his “Starchild” image in favor of a “Bandit” persona.

While Gene, Ace, and Peter had settled on the basic ideas for their makeup designs by about mid-1973, Paul tried out a new look now referred to as the “Bandit.” The first version, with plain black framing both eyes, made him look more like a raccoon. The second variation was more diamond-shaped, and while it didn’t last long there is ample photographic evidence that he used it.

7. Kiss has performed in public as a trio just twice.

On January 28, 1982, with Ace just about out of the band entirely, Gene, Paul, and Eric Carr appeared as a trio at Studio 54 to lip-synch “I” (from the recently released Music from “The Elder”) for satellite transmission to the San Remo Music Festival in Italy.

Prior to a show on July 27, 2007, Paul was hospitalized with an extremely rapid heartbeat. In his absence, Kiss performed live in concert as a trio for the first time ever. This was the first Kiss concert Stanley had missed during his then 34-year tenure with the group. 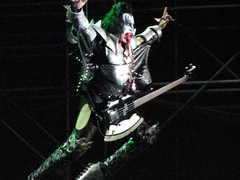 Since its release in March 1976 (on the Destroyer LP), “God of Thunder” has been synonymous with Gene and his Demon persona. In concert it marked the point where Gene would usually play his bass solo, spit blood, and even be hoisted up above the stage with wires. But it was originally arranged and sung by Paul, who wrote the song to prove he could take on heavier and darker material as well as Gene.

But producer Bob Ezrin felt it didn’t sound right as Paul’s song, so he and Simmons modified the lyrics and the arrangement — slowing the tempo down quite a bit in the process — and gave the song to Gene. Paul wasn’t thrilled with Ezrin’s decision, but went along with it anyway. The original version of “God of Thunder” did not see the light of day officially until Kiss released their five-disc box set in 2001.

Yes, that Bryan Adams — he of “Summer of ’69” and “(Everything I Do) I Do It for You.” In 1982 Adams (then a relative unknown) and songwriting partner Jim Vallance were approached by producer Michael James Jackson and asked if they had any material they could submit to Kiss — then working on their Creatures of the Night record.

Between them they submitted a pair of tracks — “War Machine” and “Rock and Roll Hell,” the latter of which was essentially a reworking of a song that appeared with the same name on Bachman-Turner Overdrive’s 1979 album, Rock n’ Roll Nights.

About three months after Creatures of the Night was released, Adams issued his Cuts Like a Knife LP and was on his way to stardom.

If there is one non-original member of Kiss who truly earned the respect and love of the Kiss Army, it was the late Eric Carr. From the time he joined the band in 1980, Carr dedicated himself to the group and its fans. By 1991 he had been in Kiss longer than co-founder Peter Criss, but in February of that year he fell ill from what was eventually diagnosed as heart cancer.

Carr battled the disease and even flew out from New York to California to record a music video with Kiss in July, but was sent home shortly after to focus on his health. He made his last appearance with Kiss in September 1991 at the MTV Video Music Awards. Two days later he suffered an aneurysm and was rushed to the hospital. He made it through that but by then the end was near. The cancer had spread to his brain and he was rendered unconscious from a brain hemorrhage. He never recovered and died on November 24, 1991 at age 41 — the same day that legendary Queen frontman Freddie Mercury died (just four years Carr’s senior) of complications due to AIDS.

3. There are six Kiss album covers featuring members who barely played (or did not play at all) on the record.

From about the late ’70s through the mid ’80s, Kiss album covers featuring band members were really more of a general guide than a true representation of the state of the band.

The first instance was 1979’s Dynasty, which featured the original foursome despite drummer Peter Criss only performing on one track (“Dirty Livin'”). The rest of the drumming was performed by Anton Fig, who was not credited at all on the original release. Unmasked, released the next year, also showed Criss on the album. This time he didn’t play a single beat, and was once again replaced by an uncredited Fig.

Next it was Ace Frehley’s turn. He is shown on the covers of Killers (a non-U.S. compilation featuring four new songs) and Creatures of the Night, despite not having played on either. To make matters even more confusing, Kiss re-issued Creatures in 1985 with new guitarist Bruce Kulick — who was not even in the band when the album came out — on the front cover, and with the entire band sans makeup.

The guessing games continued with Psycho Circus, the group’s 1998 “reunion” album. Criss and Frehley are both shown on the cover art, but their participation was limited to just a few songs. According to Criss, only the Frehley-penned “Into the Void” featured instrumental contributions from all four members.

2. Prior to joining Kiss, one of Vinnie Vincent’s jobs was as a songwriter for television.

The members of Kiss held a variety of interesting jobs before joining (or forming) the group. Perhaps the most musically interesting one belonged to Vinnie Vincent (then Vincent Cusano), who moved to Los Angeles in 1980 and found employment as a staff songwriter/musician for the television series Happy Days. Vinnie’s job for the show’s last few seasons was to stay on the set and write all of the songs that Joanie and Chachi sang.

1. The iconic Kiss logo has to be modified for use in Germany.

One of Ace Frehley’s first contributions to Kiss after joining the group in 1973 was the design of their highly recognizable logo, with its lightning bolt-style “SS.” The problem is that there was another (infamous) group that had a logo with a lightning bolt “S” — Nazi Germany’s Schutzstaffel. Their logo was an “SS” designed with stylized Armanen Sig runes.

The similarity between the SS logo and Kiss’ wasn’t an issue until around 1979/80, when the Nazi SS logo was used in a political ad in West Germany. Aware that the use of their logo could further incite the public (although it was not then illegal to use the SS symbol), Kiss modified it prior to a September 1980 tour of West Germany by rounding the edges and making it look more like a stylized KISS. All of their German-issued albums and marketing materials have since used this modified branding.