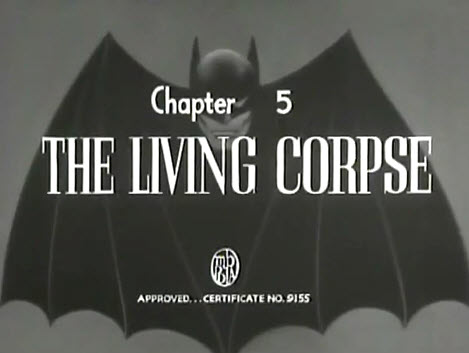 With the presentation of this chapter of the 1943 Batman Columbia Pictures serial, we’re one-third of the way through the saga. If you’ve been following the story to this point there’s no need for a recap. But in case you haven’t, the beginning of “The Living Corpse” should help. This one follows the basic structure of the first four — action scenes at the beginning and end, bookending a whole lot of talking. This is NOT Christopher Nolan’s Dark Knight.

I noticed a few curiosities watching this chapter. For one, it shows Bruce Wayne as living in Los Angeles, and for another it explicitly states that Batman and Robin are working at the behest of Uncle Sam. They’re assigned to stop Dr. Daka from sabotaging a fancy new airplane motor.

And thirdly, Japan went to WAY too much trouble to deliver a rather simple coded message and piece of film. But you’ll have to watch chapter 5 of Batman — “The Living Corpse” — to see what I mean!

Thanks to Chubbettes, Your Fat Daughter Has a Reason to Live! »