Snakes have traditionally gotten a pretty bad rap from us humans. They are easily the most feared and reviled species around, except for perhaps sharks and the Jacksons. Nowhere is this more evident than in the various snake-based characters depicted in music, literature, films, television and religion. Need an instant badass for your movie or show? Just add snake for instant villainy!

Of course, most of these villains spend most of their existence getting creamed by the so-called good guys. But some of them manage to have a little fun and wreak a little havoc along the way. So in honor of our misunderstood belly crawling baddies, I give to you the top nine pop culture snakes of all-time. Why nine? Because I’m too lazy to come up with ten, that’s why.

#9 — Tung Lashor, He-Man and the Masters of the Universe 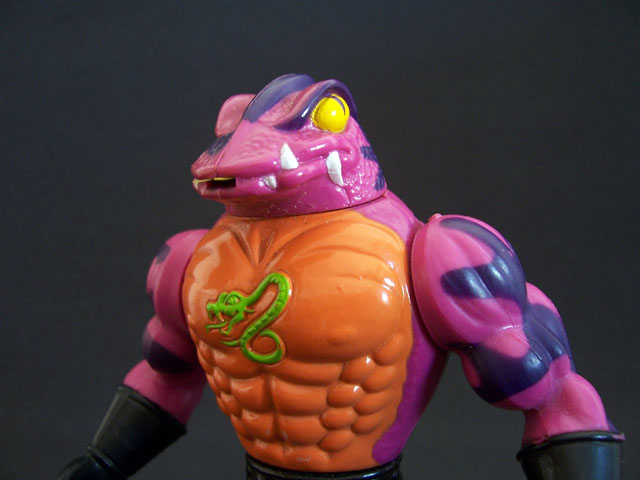 While the name might indicate he was a villain is a Charlie Chan film, Tung Lashor was in fact one of the Snake Men, a band of evil-doers only loosely affiliated with Skeletor. And as was tradition with most He-Man characters, his name was incredibly unimaginative. Apparently the creators of these characters felt their audience was so stupid that they needed names that actually described what the characters did. Tung’s lame representation in the original cartoon was remedied in the 2002 Cartoon Network version, restoring some dignity to the character.

Kaa was one of the first fictional serpents I saw as a child, and he definitely creeped me out. In hindsight my fear was totally unfounded. He was a Disney character after all, which meant that his role was one part villainy and two parts comic relief. In the original Rudyard Kipling stories Kaa was actually a hero, believe it or not. Kaa’s coolest trait was his ability to hypnotize other creatures, except that little punk Mowgli. 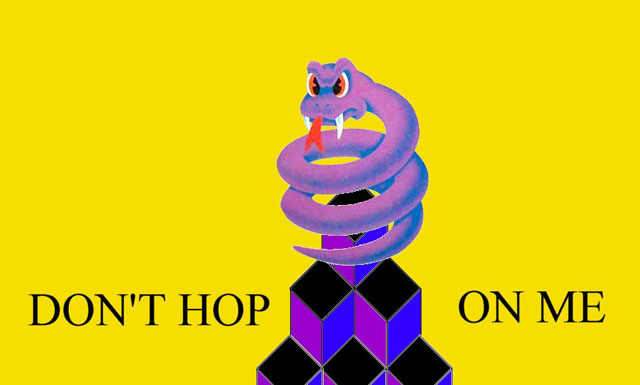 Coily’s story is one of missed opportunities. He began life as the silent, springy nemesis of Q*Bert in the iconic video game of the same name. Of all the villains in Q*Bert’s world, Coily was easily the best. It was almost worth it to let him win the game, if only because it caused the hero to spew forth a Dagwood Bumstead-esque string of profanities. Unfortunately, Coily was ruined when the Saturday Supercade TV version of Q*Bert appeared. Apparently feeling that just being a purple snake wasn’t evil enough, the writers decided to dress Coily up in what looked like some kind of S&M biker outfit. $@!#* that.

OK, so maybe the name Apep doesn’t invoke the sense of dread it should, but he was not to be trifled with. Apep was credited with being the one to swallow the sun every evening, only to be defeated by the sun god Ra in the morning. The Egyptians routinely prayed to the Ra in the hopes that he would continue to defeat Apep, the personification of evil. So basically, Apep had an entire kingdom routinely rooting against him. Most artistic depictions of Apep are of his defeat at the hands of other Egyptian deities. Poor misunderstood serpent. 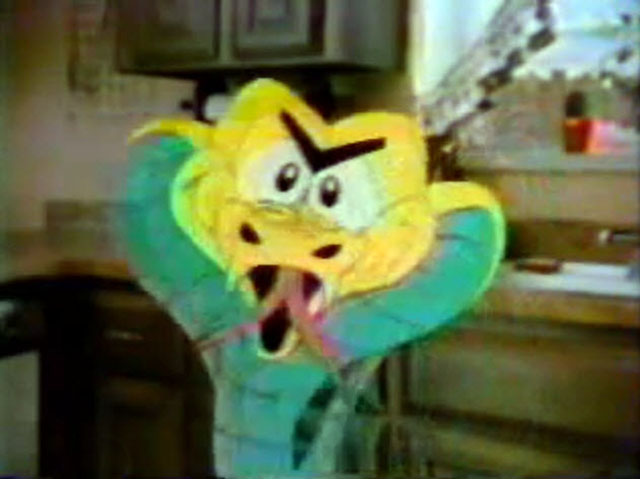 The late 1970s and early 1980s were the end of the Golden Age of Public Service Announcements, or PSAs. One of the all-time classics appeared in 1982. In it, Bugs Bunny hipped kids to the hidden dangers of the kitchen. One of these dangers was a dangling coffee pot cord. What looked like an ordinary power cord morphed into a sinister snake, voiced by Mel Blanc himself. He revealed that he was a danger to kids “especially if they grab hold and yank me.” Remember kids, no yanking, OK?

Anyway, I guess back in the ’80s it was commonplace for mom or dad, in a rush to get to work, to just yank the cord out of the outlet and let it hang over the edge of the counter. I know I do that all the time. I think it’s safe to say that the reason more kids today aren’t maimed or killed by coffee pot head bonkings was this scarily effective ad.

I’ll admit it — I HATED Serpentor when he first arrived on the scene in 1986. In my mind, Cobra Commander was the ultimate Cobra badass, and I wanted nothing to do with any other so-called leader or self-styled emperor. It was like finding out that Darth Vader was really just Emperor Palpatine’s puppet in The Empire Strikes Back. In time, I grew to accept Serpentor, mostly because I had no choice after Cobra Commander was offed in G.I. Joe: The Movie. (And don’t even get me started on that Golobulus clown.)

But hey, anybody who gets to ride around in a stylin’ personal hover-chariot can’t be all bad, right?

Snakes 1, Humans 0. Satan’s appearance in the Hebrew Bible is probably what set the stage for all the bad vibes thrown the snake’s way since then. After all, before the serpent in the Garden of Eden showed up, we had it all. But in one of the earliest examples of man’s ego, we listened to the serpent because he told us what we wanted to hear. Bad move. Although we’ve harassing snakes ever seince then, they did get on the scoreboard first.

If you’re going to start a paramilitary terrorist organization, I don’t think you could do any better than to put ol’ Double C in charge. Oh sure, the cartoon tended to focus on his mistakes, but I really think it’s unfair to pin the blame for all of Cobra’s failures on Cobra Commander. It’s hardly his fault, for example, that the average Cobra soldier has worse aim than an Imperial Stormtrooper.

In a further testament to his coolness, the original Cobra Commander action figure came in three varieties in the ’80s — the classic helmeted look, the hooded style and the super-slick Samurai battle armor. As mentioned in the Serpentor entry above, it was the height of stupidity and arrogance to turn him into a literal snake in G.I. Joe: The Movie. Such an undignified end for a great all-time villain.

Thulsa Doom had it all. Not only was he the unquestioned ruler of all the land, he was a hit with the ladies. When you have so many nubile women available to you that you can casually get rid of some of them in ritual sacrifices, you are doing something right. Befitting Doom’s status as the supreme serpentine baddy, he was portrayed in the movie by none other than James Earl Jones. You may remember him more for his role as film’s most iconic villain, “Papa” Jenkins from Welcome Home Roscoe Jenkins.

Only at the very end of Conan the Barbarian did Doom finally meet his match, when a misguided attempt to win Conan over to his side went horribly wrong and Doom’s head (sans body) went tumbling down the steps of his own palace. He even found a cool way to die.