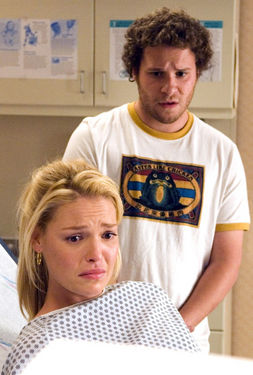 When I saw the first advertisements for Knocked Up, I could not have been less intrigued. After all, the “unprepared couple bumbles their way through pregnancy” plot is as old as the hills, and I doubted very much that director/writer Judd Apatow would be able to bring a fresh perspective to the table.

Apatow, for those not familiar with him, has produced some of the biggest hit comedies of the last five years, including Anchorman: The Legend of Ron Burgundy and The 40 Year-Old Virgin. But while those movies were essentially really long sketches that relied on star power (Will Ferrell and Steve Carell) and liberal amounts of raunch for their success, Knocked Up is a much more assured and satisfying film.

For those who have seen Nine Months or any movie like it, Knocked Up will feel familiar – Ben Stone (Seth Rogen) and Alison Scott (Katherine Heigl) hook up for a rather implausible one-night stand, which leads to a bun in the oven for Alison. There’s fear at first, followed by some ham-handed attempts to make things work. Inevitably, Ben is confronted by his inadequacies as a father-to-be, and is pushed away by Alison so he can get his act together. He returns a changed man, and there is much rejoicing.

While the story is hardly groundbreaking, Apatow maximizes Knocked Up‘s potential by minimizing the amount of clichés normally found with movies like this. There’s no fainting men in the delivery room no awkward attempt to build a crib, and no lame jokes about how weird Lamaze class is.

Knocked Up also features some very genuine explorations of relationships and happiness. The two main couples in the movie are more characters than caricatures, although Ben’s pot-smoking buddies are nothing more than comedic cannon fodder (albeit good ones). There are also a ton of pop culture references, which to me are better than most sex scenes. Any movie that contains a discussion about the merits of Steely Dan wins instant points with me.

But what elevated Knocked Up above most recent comedies are some fine comedic performances by Rogen and Heigl, as well as by Paul Rudd, Leslie Mann, and Jason Segel. Saturday Night Live‘s Kristen Wiig gets very little screen time as Alison Scott’s rival at the E! Network, but makes the most of it with a brilliantly subtle performance.

To be certain, this movie most definitely earns its R rating with healthy doses of profanity and drug humor. But for the most part, the language feels a lot more organic than, say, The 40 Year-Old Virgin. The only scene that stood out as gratuitous took place in the delivery room, and transported me right back to high school health class. I’ll just leave it at that.

In a movie landscape dominated by mega-blockbusters like Shrek 3, Spider-Man 3, and Pirates of the Caribbean 3 (notice a trend?), Knocked Up is a welcome respite. It hopefully also is a sign of things to come from Apatow, who has now proven that he can turn a pedestrian story into an entertaining movie. I look forward to seeing what he can do with more original material.