Album review: Spinal Tap – Back From the Dead 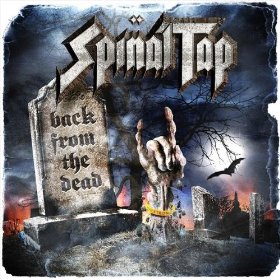 I don’t think I could ever get tired of watching the 1984 mockumentary classic, This Is Spinal Tap, or listening to the accompanying soundtrack.  That movie and, more importantly, its music perfectly straddled the fine line between brutal satire and straight-laced performance.  It’s this quality that spawned not only legions of fans for a fictitious band but more awesomely the legendary tale about the Scorpions storming out of a screening of the movie because the parody hit a little too close to home.

It’s as if Spinal Tap (Christopher Guest, Harry Shearer, and Michael McKean) and director/co-writer Rob Reiner gazed into a crystal ball and saw just what a joke the heavy metal genre would become by the end of the decade, which makes the movie and songs even better after the fact.  But what I really love about it is that while the songs (“Sex Farm”, “Tonight I’m Gonna Rock You Tonight”, etc.) are of course goofy, they actually do rock and thus can be enjoyed on multiple levels.

So what to make of Back From the Dead, Tap’s first release since 1992’s Break Like the Wind?  On the surface all the elements for continued greatness are here – the idea behind this album is to celebrate the quarter-century since This Is Spinal Tap, and to give the boys a chance to pay homage to the past and also show they have the chops (musical and comedic) to pull off new material.

Of the album’s 19 tracks, nearly half are straight-up remakes of the original classics.  They feature a punchy, dry, and pristine mix, which actually works against them.  Without the forgiving gauze of hazy ’80s production techniques to make the band sound identical to their “legitimate” counterparts in the metal world, they now just sound like a bunch of comedians playing hard rock/metal songs.  An older Michael McKean, who didn’t exactly make people forget Rob Halford in the first place, sings without the power and range necessary to really sell these updated takes.  Not bad, per se, just unessential.

Much more interesting to me is the pair of Tap chestnuts given a complete stylistic makeover – “Sex Farm” now brings the funk, while the reggae of “(Listen to the) Flower People” turns it into a whole new experience that rivals the original.  The former, in particular, sounds like the kind of thing David Lee Roth would do with an old Van Halen song, and I like it.  These two songs alone outshine the other old material, which just sounds like a tribute band really.

Then there’s the new stuff.  First I must make mention of the three parts of “Jazz Oddyssey” peppered on the album – I’ll admit that I love them just because one of my favorite parts of the movie was when Tap, short a guitar player and out of complete desperation, resorts to playing some weird jazz fusion piece written by Derek Smalls.  I can’t tell you how many times I watched that and thought to myself that it was too bad they didn’t play a little longer, as I kind of liked it.  Well I’m guessing I’m not the only one who felt that way, and 25 years later we get our wish.  In any other context this trilogy would sound like a series of bad outtakes, but here it works perfectly.

Of the remaining new material, the title track is easily the best of the bunch and holds its own against any of the old stuff.  The rest isn’t bad either – “Warmer Than Hell” is witty and would almost fit into an early ’80s Judas Priest record, while the pleasant vocal harmonies of “Celtic Blues” are surprisingly sweet (although if I told my wife her hair was as brown as stew, I’d probably get slapped).  “Short and Sweet”, featuring John Mayer, Steve Vai, and Phil Collen of all people, doesn’t go for the laughs and does in fact feature a nice boogie shuffle and some nifty fretwork.

If you haven’t been won over to Spinal Tap by now, Back From the Dead is not for you.  This is definitely an album for true believers.  Overall, the long-awaited return of Nigel Tufnel, David St. Hubbins, and Derek Smalls is not quite triumphant but still plenty of fun.  So get a copy and turn it up to 11.