Yesterday marked the 75th anniversary of the practical end of Prohibition in the United States. On that day in 1933 — eight months before the passage of the Twenty-First Amendment to the Constitution — it became legal brew and sell beer with 3.2 percent alcohol by weight (4.0 percent by volume). For reference purposes, a can of regular Budweiser is 5.0 percent alcohol by volume.

To celebrate this auspicious occasion I’ve grabbed a sample of beer ads throughout the years. Because I know how to party.

(The main site has many more vintage alcohol ads for your viewing pleasure.)

From the Land of Sky Blue Waters (Minnesota) comes this vintage TV ad for Hamm’s combines a few of my favorite commercial elements — wonderful animation and a super-catchy jingle. Sascha, the Hamm’s Beer bear, was used in ads for about three decades. Of course I wouldn’t be too thrilled over seeing the source water for my beer being used as a wild animal’s playground, but whatever.

Guinness has produced some of the finest ads of any product that I can think of. Throughout the 1930s and ’40, John Gilroy illustrated a series of them that is iconic to say the least. A number of animals are shown in the ads, but the toucan is probably the most instantly recognizable one.

I pity the kids of today, growing up without awesome beer ad campaigns like Miller Lite’s famous “Taste Great, Less Filling” series. These tongue-in-cheek spots were a Who’s Who of A and B-list sports celebrities of the ’70s and ’80s, including Bob Uecker, Bubba Smith, Dick Butkus, and Ben Davidson.

I will drink a beer. I will pound a beer. I’ve even been known to chug a beer. But I’ll be damned if I will ever “quaff” a beer.

OK, it’s not quite regular beer, but I can’t miss this opportunity to praise the wonderful ads of Schlitz Malt Liquor. Here’s the typical scenario: previously flavor-starved beer drinkers step up to the pleasures of Schlitz Malt Liquor, then a bull inexplicably charges through a wall/door/window (fans of Johnny Dangerously should remember the Schlitz reference in the scene where Danny DeVito’s character dies). To wit, a typical Schlitz ad:

But even better is the iconic image of the charging bull combined with the awesomely entertaining dancing of the Lockers, featuring one Mr. Fred “Rerun” Berry! 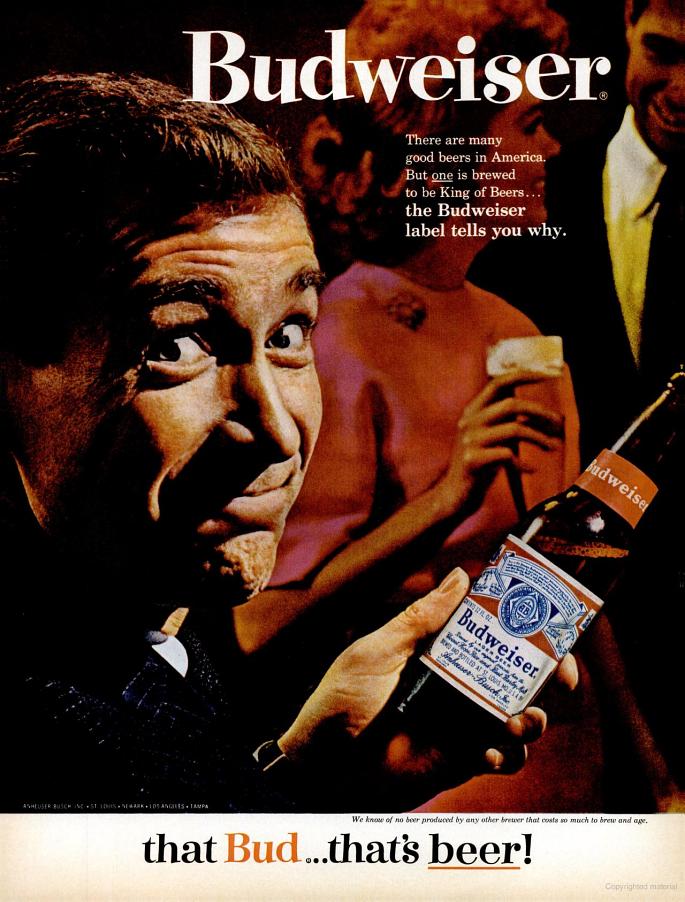 The ad says Budweiser is good. The guy’s face says “Bud?  Are you f*@$ing kidding me?”